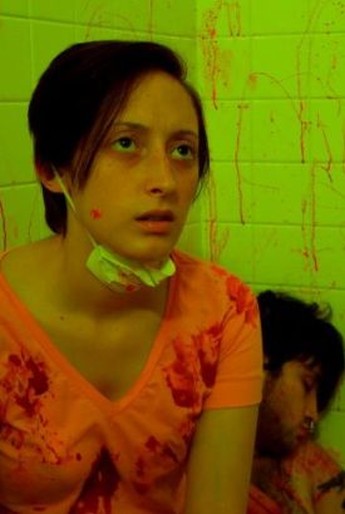 Back before Adam had Eve, he had Lilith, who was cast out from the Garden of Eden. The offspring of her and her demonic lovers were the Lilin, who have an unusual mode of survival. Every 28 days. they have to have sex with a man, or they’ll bleed to death. However, if they do, their victim dies. They’re still around in the modern world, and Louise (McEver) is one, a young Lilin balancing her needs with a job in a video-store. She doesn’t realize that the men she kills can come back, and so she’s startled to see Charlie (Shields), the apparent reincarnation of an earlier love whom she killed. As her feelings for Charlie start to grow, there’s a real sense that the second verse might end up going just the same as the first.

Well, it’s certainly different. There’s a whole hodgepodge of influences here: clips from public-domain horrors like Carnival of Souls, Nosferatu and Night of the Living Dead, an obvious affection for Louise Brooke in both the lead character’s name and the movie title (there’s a Brooks film Diary of a Lost Girl), the surrealism of Guy Maddin and early David Lynch, copious amounts of green-screen and lurid video effects. Hell, you could even throw in Cat People, both because of the heroine’s attempts to suppress her sexually carnivorous nature, and the copious nudity (though much of it here is not exactly sensual). What results, however, from all these different sources, pulling in radically-different directions, is probably one of a kind, particularly on the visual side.

However, it’s solid evidence that “different” does not necessarily equate to “good,” especially for someone like me, who considers Eraserhead one of the most over-rated concoctions in cinematic history. This has some interesting ideas, not least in the main narrative. The concept of demonic spawn having to get jobs and deal with everyday life in the 21st century is appealing, in a Lost Girl kind of way – yeah, another influence! But, too often, this descends into what could be labelled as “art wank”: self-important posturing that is nowhere near as smart as it likes to think, with a grating soundtrack and too interested in what it considers style, rather than substance.