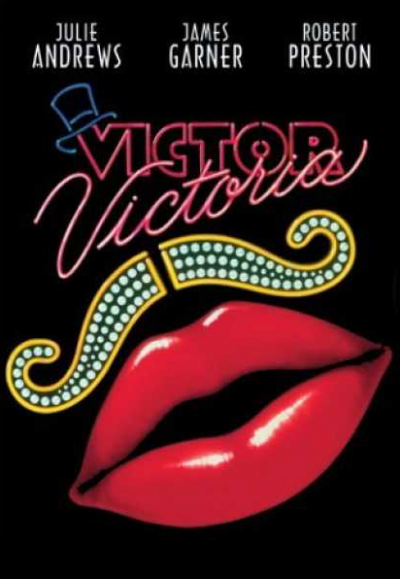 That’s even though I’ve never been much of a fan of Blake Edwards and his comedies. The Pink Panther series left me largely unmoved: Peter Sellers putting on a silly voice and prat-falling is something which has limited appeal. I didn’t realize that V/V was originally intended as another vehicle for Sellers, before his death in 1980. Interesting to speculate how that might have turned out. Nor was I aware that this is actually a remake of a Weimar Republic movie from 1933 with the same plot, Viktor und Viktoria.

It’s set around the same time, but is moved to Paris. Down on his luck drag artist Toddy (Preston) bumps into down on her luck singer Victoria Grant (Andrews) and has the genius idea of reinventing her as female impersonator – and member of the Polish aristocracy! – Count Victor Grazinski. She/he/xe achieves great success, but also catches the eye of visiting Chicago “businessman” King Marchand (Garner), who is appalled to discover that the “woman” over whom he has been drooling is apparently a man. But, hey, to quote Sons of Anarchy, “never judge a book by its penis,” and King charged on regardless, despite the disdain of his current girlfriend, Norma Cassidy (Warren).

Hilarity, I guess, ensues. Except, it doesn’t. This is a comedy which seems more interested in getting the whole world and all its many, many genders, to join hands and sing Kumbaya, than… Oh, I dunno: being funny. The film’s peak humor is reached early, with a sequence of supreme bitchiness betweed Toddy and a gloriously deadpan waiter (Graham Stark, like Sellars and Andrews, another Edwards regular). It doesn’t come close thereafter, though Warren’s chirpily malicious gangster moll is fun to watch. It works better as a musical, with Andrews getting a couple of true showstoppers, courtesy of Henry Mancini and Leslie Bricusse, and the scenario gives full rein to some lavish staging.

But it suffers from the same basic problem as Mrs. Doubtfire – sorry, “Mee-sus Doot-fi-er” – and Wing Chun. Julie Andrews is as convincing a Polish count, as Robin Williams is a Scottish nanny, or Michelle Yeoh a man. Which is: not at all. It’s an illusion that doesn’t so much stumble out of the gate, for me, as refuse to leave its comfy stable at all. As a result, it’s never going to be more than an implausible trifle, albeit certainly not devoid of charm.