I watched this mostly on the strength of a synopsis, which casually forgot to mention that this is anime. Consequently, I was expecting something live-action, along the lines of Tokyo Gore Police or The Machine Girl. But, it’s probably better this way, as the mad invention on view here would be hard to reproduce in any other medium save animation. Kaori (Kataoka) and her two friends are celebrating graduation with a trip to Okinawa, only for their vacation to be interrupted by the first in an escalating series of attacks by killer fish. With legs. That have the ability to breathe out of water. And infect anyone they scratch, turning them into hideous fish-human crossbreeds. Yep, that’s going to be a one-star review on Trip Advisor.

Kaori makes her way back to Tokyo, in search of her fiance, Tadashi (Negishi), who has gone missing. Conveniently, turns out his uncle has been researching these very aquatic creatures, and can shed some light on where they come from. How to defeat them? Well, maybe not so much. And that’s kinda the problem with the whole film. It is long on ideas, short on combining them into anything approaching a coherent whole. Are the creatures organic? Mechanical? A by-product of wartime biological warfare experiments? Could be all of the above, or none. Maybe the manga on which this is based – by Junji Ito, who also created the Tomie series – does a better job of explaining it, for Hirao seems more concerned with (admittedly, well-executed) shock tactics of body horror. 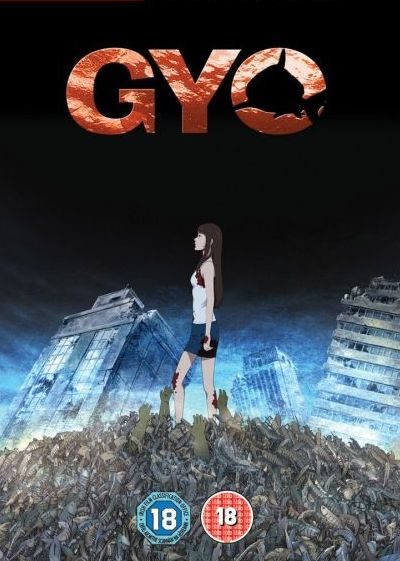 The film is stronger in the first half, setting up a Tokyo under siege from the sea, and gradually degenerating into chaos and tenticular anarchy. There’s a feel of a higher-tier SyFy original movie about the concept here, though maybe that’s a result of having bumped into five minutes of Piranhaconda the same day I watched this. However, the longer it goes on, the more it seems to be trying to make statements about meddling with nature, etc. In the same way Godzilla was not just a monster movie, but also a metaphor for nuclear devastation, so the creatures here appear to be a warning about humanity’s contempt for its planet. Which would be easier to take seriously, if these were not in the same film as a walking shark interrupting a gratuitous threesome.

This kind of thing – be it a B-movie schlockfest, or an ecological message movie – requires rather more commitment than received here. Hirao seems to want to have his sushi and eat it too, resulting in a whole significantly less than the sum of some thoroughly imaginative parts. Just be prepared to offer a lengthy explanation should your other half wander in mid-way through, as Chris did when I was watching it. For even by this house’s high standards of weirdness, this is pretty damn strange.