Anthology films are always, by their nature, going to be a mixed bag, especially when you have different directors telling the stories. That’s more the case now than it used to be. In the sixties, Amicus were renowned for their “portmanteau” horrors, such as The House That Dripped Blood, but those had a single director for all their episodes, so there was a common “look and feel” to them. That continued, through 1982’s Creepshow directed by George A. Romero, and even as recently as Trick ‘R’ Treat from 2007, but since then, the trend seems to have been for multiple directors. V/H/S and its sequels begat The ABCs of Death and its sequels, which now appear to have spawned this Mexican take.

Eight directors get about 12 minutes a pop to tell their stories, so it sits somewhere between V/H/S and ABCs in terms of scope. At 16 minutes, the end credits run longer than the segments, and finish with a self-important pronouncement that no subsidies were received from anywhere for the film. The embattled viewer might be forgiven for wondering if the results would be better if they had some kind of external input. For much of what we see has the meandering and self-indulgent approach of film-school vanity projects. While the worst offenders might be tolerable as standalone projects, when stacked back-to-back, the results drift into art-wank nonsense of an esoteric degree. Let me just quote you one line, deserving of enshrinement in the Bad Dialogue Hall of Fame. 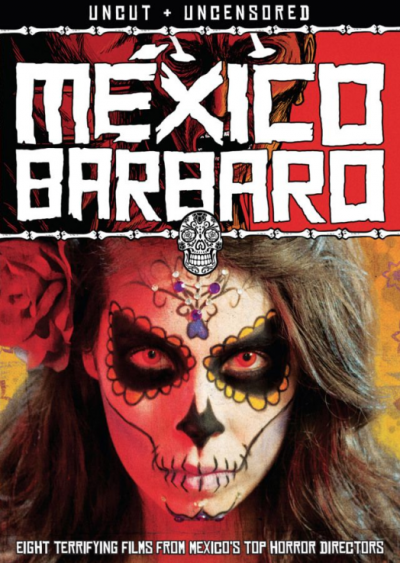 “You have to drain the blood of your sister’s vagina, If you can’t accomplish this in 12 hours, I will suck your soul through your anus.”

Lost in translation? There may be a context where the above makes sense. It would likely require much more, and significantly better, exposition than it actually gets in the third segment, “Drena” (Drain), apparently about a haunted cigarette butt. [Oh, something else that needlessly irritated me – the card with each short’s title follows it, rather than preceding it. Why bother?] It was at this point I came closest to turning it off, following on the heels of the meaningless Tzompantli, and the prettily-shot (with a great location) if incoherent Jaral de Berrios, in which a couple of thieves seeking sanctuary find themselves in even worse danger from a spirit.

Things do recover with the appallingly tasteless La Cosa mas Preciada (The Most Precious Thing). A young couple, seeking a quiet spot to lose her virginity, rent a room in a forest hotel, only to find themselves under siege by local creatures, who look – and worse, behave – like a pack of geriatric Gollums on Viagra. The picture at the top of the review comes from this section. I’ll leave the precise context for the still to your imagination. This is followed by Lo Que Importa es lo de Adentro (What Matters is What’s Inside), a short with the feel of a modern-day Grimm Fairy Tale, with its story of child theft. While it starts well, and certainly delivers on the gore, it kinda peters out, without going anywhere.

Probably the only director you might have heard of, Jorge Michel Grau, follows up with Muñecas (Dolls). about a woman’s desperate attempt to escape from… Well, that’s the reveal, so I won’t spoil it, though I was surprised to see it appears inspired by a real place. It’s not bad, and does at least tell a complete story, unlike just about all its colleagues. However, it’s back into the pits with the almost entirely incomprehensible Siete Veces Siete (Seven Times Seven). I think it may be about a man’s quest for revenge. I would not, however, be prepared to wager anyone else’s cash om this. It does finish strong, with Dia de los Muerto, about which I need say no more than “psychotic strippers – many psychotic strippers”. If you’re getting more than a little From Dusk Till Dawn vibe here, you wouldn’t be wrong.

Anthologies, by their very nature, are going to be inconsistent, and tend towards mediocrity. The odds of every element being very good, decrease rapidly as the number increase. On the other hand, the more stories you have, the easier it is for the viewer to tolerate the bad, on the basis that there’ll be another one along in a minute. The problem here is, the bad significantly outweigh the good, and when you get consecutive poor entries, they compound each other to the point where you’re left wondering whether to cut your losses – something easier to do in an anthology, since you have made less commitment, compared to the situation midway through a film telling a single story. If we didn’t quite give up, the idea certainly crossed our minds.