Why isn’t the tagline here, “Because gingers have no soul”? For if you can imagine Single White Female with more regurgitation and slightly less masturbation, you’re probably not far off the mark. Hollywood room-mates Jill (Orr) and Jennifer (Loveless) have s strange love-hate relationship. Jill is painfully introverted, and overweight – at least in Los Angeles terms – despite her fondness for purging. Jennifer is an extrovert, rail-thin despite her fondness for pigging out on junk food. After Jennifer makes the mistake of sleeping with a boy in whom Jill shyly expressed an interest, this kicks off a chain of events which ends with Jennifer chained up in their apartment. 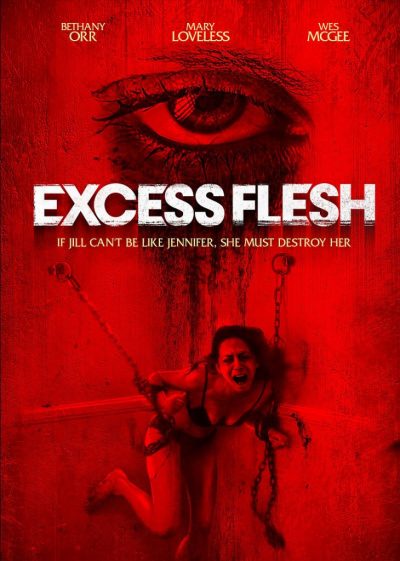 I can see what this is trying to do, certainly. But I think the script has got it all backwards, and would certainly have been much more subversive to have had the skinny, attractive girl be the one who cracks, rather the victim. Rather disappointing to see a film supposedly concerned with body image and its negative impact, instead perpetuating the usual stereotype that thinness = happiness. But, as ever, I care less about any moral messages or social commentary presented by a movie, than whether or not it works as a film. Unfortunately, more doesn’t than does: if I see another extended slow-motion, excessively squelchy shot of food going into (or coming out) a mouth this quarter, it will be too soon.

Some inkling of a likely problem here comes from the official website, which informs us that Kennelly’s film “continues his preoccupations with cultural collage and the deconstruction of genre as a strategy to represent knotty issues of social, personal and cultural identity.” If you’re David Cronenberg, you might be able to get away with this kind of pronouncement. Eventually. As in, after you’ve made several movies, paid your dues, and established your ability in areas such as basic story-telling. Instead, too often and especially in the early stages, this is forgotten for portentous, overlong shots that are clearly intended to be Very Important Indeed.

When we get to the eventual hostage-taking section, things do improve, even if Jennifer seems strangely complicit; I’d be yelling my head off, from the moment I regained consciousness. However, credit is due to both lead actresses, who are clearly giving their all; there’s a nice parallel between the decay of Jennifer’s mental state and the apartment’s descent into (and beyond) squalor.  I suspect the producers did not get their deposit back. There’s one glorious fantasy sequence, depicting a cooking show, that shows real imagination and inventiveness. The rest? May provoke queasiness, like a slightly-undercooked burrito. The burrito would likely stay with you for longer.