Benjamin Franklin once wrote, “Those who would give up essential liberty, to purchase a little temporary safety, deserve neither liberty nor safety.” Personally, I would welcome with open arms the establishment of any totalitarian government who promised to ban preschool children from cinemas after 9pm. Seriously, folks: Hollywood is not your goddamn babysitter. We deliberately chose a 9:30pm start time, so we would not have to put up with this shit. If your rug-rat is incapable of sitting for two hours without shrieking at the top of their lungs, do not bring them to the fucking movies. If something happens to trigger said shrieking, take them outside. Not rocket science, folks.

On the plus side, nice to be reminded now and again, that a major benefit of piracy is not having to deal with other people and the fruit of their loins. You don’t have to yell at kids to get off your damn downloads. 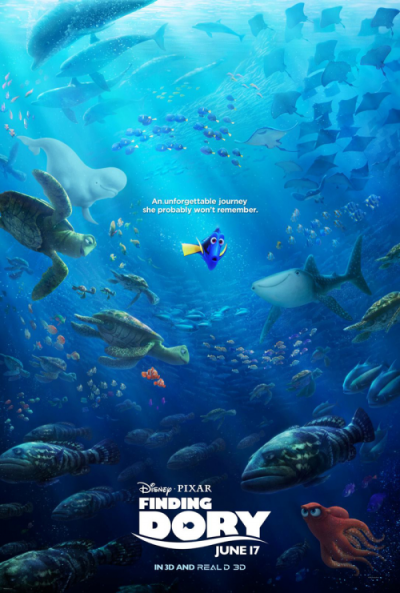 Anyway, this is a shamelessly manipulative sequel, which sinks its scaly fins into the audience’s heart-strings, right from the opening scene featuring a baby Dory playing hide-and-seek with her parents. Seriously, her eyeballs must represent a full one-third of her body weight. Each. It’s told partly in these flashbacks, mostly as adult Dory (DeGeneres) heads out in search of her lost parents, trailed by Marlin (Brooks) and Nemo (Rolence). This brings Dory to a sea-life center on the California coast, where grumpy septopus Hank (O’Neill) – he lost a tentacle in an accident – agrees to help the forgetful fish find her family.

There are a number of ways in which this falls short of the original: characters and storyline are the most obvious, and “obvious” is a fairly good word to describe their shortcomings, too. The original was a non-stop parade of invention on both fronts: you never knew what lay around the next breaker. Here, Hank is likely the only new character to make any kind of impression, and the storyline is a near-carbon copy of the first, even though Marlin and Nemo’s presence is almost close to superfluous, in terms of the plot. They trail in Dory’s wake for the entire film, and would provide more value, deep-fried in crispy beer-batter and with a side of tartare sauce.  Plus, I expected better than the old “dramatically appropriate amnesia” saw.

All of which seems entirely condemnatory, but is not the case. I laughed, I sniffled, I hummed along with the end song, and this is salvaged mostly because Pixar are just so damn good at their job. Like peak Spielberg, while you may know you’re being emotionally manipulated, that doesn’t stop it from working, dammitalltohell. If you aren’t swallowing hard, at least once in the final 10 minutes, you probably consider Dexter Morgan a role-model. We’re also holding the company to a far higher standard than anyone else. If this had been the product of Dreamworks Animation, it would be among the best of their entire output. Beside Monsters, Inc, Wall-E and Up? The faint scent of questionable sushi hangs over the project.

However, there’s no doubt that Dory stole every scene she had in the original, and making her the focus of the sequel was an insanely smart decision. DeGeneres hits just about every line out of the park, and the rest of the voice cast aren’t far back. Add the typically lush visuals, and you’ve got something which seems sure to win the 2016 Academy Award for Best Animated Feature. But I can’t say it’s one that will get us to drop what we’re doing, whenever we stumble across it on cable, in the way the original still does, thirteen years on.