After the slick efforts of Roar Uthaug and John Andreas Andersen, in The Wave and its sequel, The Quake, I was hoping for a similarly high-quality of Scandinavian disaster porn here. Sadly, I didn’t get it. While this has its moments, it has more in common with a TVM, or at least never manages to get past elements which were likely already cliches, back when the genre was born in the seventies. As the title informs us – while subtly seeking to ride the coat-tails of its predecessors – the setting here is a nine kilometre long road tunnel. under a Norwegian mountain on the road to Oslo. A fuel tanker crashes, blocking the tunnel and subsequently blows up, filling it with acrid, toxic smoke, which threatens to asphyxiate those trapped inside. 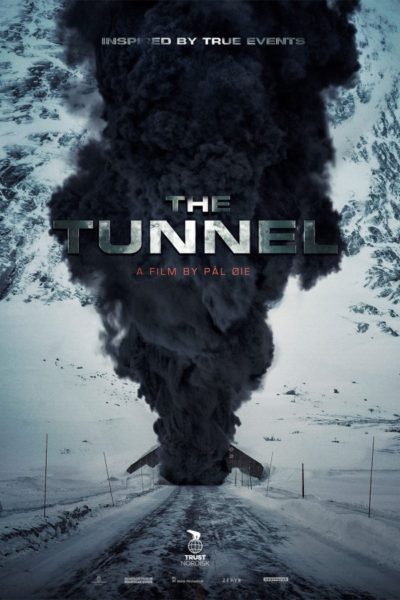 Outside is rescue worker Stein, played by Thorbjørn Harr. He looks exactly like his name sounds, i.e. as if he had just walked off the set of Vikings. And, hey, whaddya know, he played Jarl Borg on the show, most notable for getting blood eagle’d to death. I suspect that Vikings plays much the same role for Norwegian actors, that Doctor Who does for British ones, or Xena: Warrior Princess did for New Zealanders. Everyone ends up working on the show, sooner or later. Anyway, Stein has bounced back from the death of his wife, and is now settling into a new life with Ingrid (Carlehed), much to the annoyance of teenage daughter Elise (Fuglerud – I suggested changing our surname to “Fuglerud”, but Chris was having none of it). Elise storms off, catches a bus to Oslo and, wouldn’t you know it, ends up trapped in the tunnel when it all goes down.

It’s all bog-standard soap-opera stuff, and you know that Stein is going to charge into the tunnel – I was almost expecting him to yell “For Odin!” – in defiance of his superior’s orders, seeking his daughter. That’s exactly what happens, except the pacing is off. Sure, he finds her, but there’s then another subplot added, with further kids to be rescued, as if the makers suddenly realized they needed to pad things out to reach the required running-time. We don’t really know anything about these new victims, so any care about them is hard to come by, and by this point, Stein’s willingness to put himself in the line of danger comes close to some kind of death-wish.

The technical aspects are what salvages this from being a disastrous disaster movie, after the dramatic elements fail to do so. The photography does a good job of generating a claustrophobic atmosphere, without sinking into darkness, and the more spectacular elements, such as the tanker explosion are well-handled. However, it peaks too early, and doesn’t have enough to offer beyond that point. Overall – I can’t believe I’m saying this – you are probably better off watching Sylvester Stallone in Daylight, if you want a decent bit of tunnel vision.