On a remote mountain in the former Soviet province of Georgia, a hit-and-run snowboarding accident leaves a young girl dead in the snow. Three years later, American extreme tourists, Max (Hafner) and Mia (Sakhno) arrive for a vacation Max promised they will never forget. Well, he’s not wrong… For after they blatantly ignore multiple dire warnings from the locals, such as hotel receptionist Lali (Dalakishvili), about the perils of taking on the supposedly haunted Black Ridge, the absolutely expected happens. The two lose contact when a mysterious fog descends, and Mia finds herself menaced by a black-clad figure on a snowmobile. The figure triggers an avalanche, burying Mia, and she comes to, finding herself in a remote cabin being tended to by an old man (Japharidze). 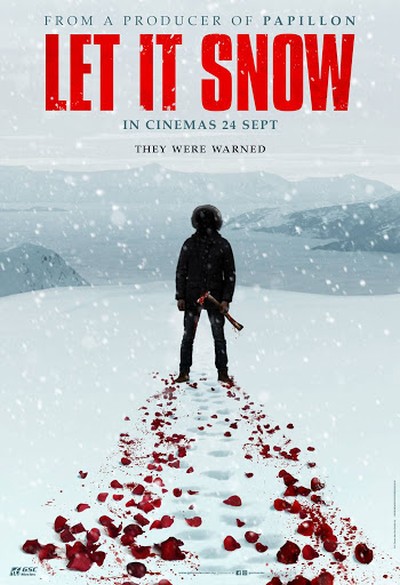 I classed this as a horror-thriller, and it’s a bit of an awkward combination of them. It feels like it should be a snow-bound slasher, with a vaguely Christmas theme (the song Let It Snow makes multiple appearances), to no particular purpose. However, there isn’t the body-count to justify this aspect, with the masked psycho curiously unwilling to take action. They repeatedly show up, look menacing for but in the vicinity of Mia, then vanish without taking action. Given what we learn towards the end, this reticence doesn’t make much sense. Other that that, you get a lot – and, I mean, a lot – of scenes of our heroine marching (or, later, staggering) across the hilly landscape.

Must say, the cinematography here is thoroughly on point, capturing the sparse beauty of the region wonderfully well. There are also a couple of sequences which show how this might have gone. A sudden burst of flora in the middle of the snowy wilderness. A genuinely impressive avalanche. The world’s creepiest snowman (top). And a post-credit sequence which hints at a possibly better sequel. Sakhno and Dalakishvili both give decent performances – certainly better than Hafner, who likely gets out-acted by the snowman – and these are just about enough to keep me watching, if not exactly engrossed, over the 87-minute running time. The sheer novelty of a film made in Georgia is, I admit, also a plus, and technically, I admit this was better than I expected.

In the end though, none of it matters. For there just isn’t enough going on in the core of the plot. The basic idea is clear from the beginning – maybe if they hadn’t shown us the accident in the prologue, preserving some mystery as to motive? For there is insufficient added to the concept, over the remainder of the film to justify its existence. The same goes for the execution: once Mia and Max get separated, not much happens of note in terms of development or pushing the plot forward. Instead, we get clunky flashbacks, which conspire to rob the film of any tension it had been generating. While I am not averse to seeing what the makers do going forward, this isn’t it.