There are films that are good, there are films that are entertaining, and there are films where you must admire the effort that went into them. Two of these three apply to Sky Sharks, and you can probably work out which ones. This was some seven years in the making, with those behind slogging on, regardless, and such persistence can only be applauded. The end result, however, certainly looks like it was the result of a long, drawn-out process, especially in the scripting stages, where it feels like three separate movies pressed into the cinematic equivalent of Spam. Yet there are some gloriously awesome set pieces that, on their own, justify the film’s existence. 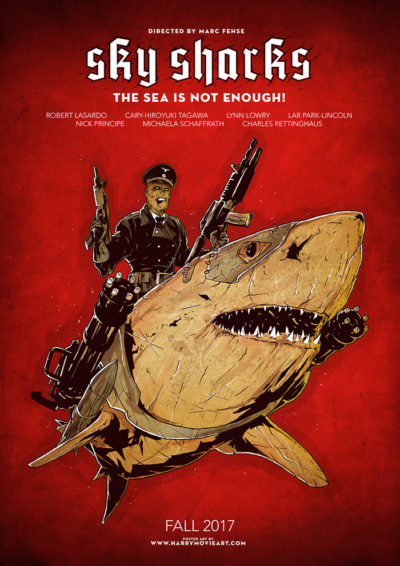 Time has caught up and passed the loopy concept. which originated in an era before Sharknado begat roughly eight billion, increasingly silly, shark attack movies (many of which we have reviewed here). In this one, at the end of WW2, German scientists attempted to create  secret weapons that would turn the course of the war. As we know, they failed, but the results were entombed in the polar ice until global warming resurrected them. Which is how, to cut a long story short, we have flying sharks with Nazi zombies riding on their backs, attacking planes in flight, destroying landmarks and, in general, behaving quite badly. Fortunately for the modern world, German scientist Dr. Klaus Richter (Morris) was, like Wernher Von Braun, rehabilitated by the Allies after the war as part of Project Paperclip. Assisted by his daughters, Angelique (Nedeljakova) and Diabla (Habermann), he has a counter-force of his own.

It really needs some editing, with significant stretches where nothing much is happening except for cameos (these include – deep breath – Tony Todd, Cary-Hiroyuki Tagawa, Lynn Lowry, Asami and Mick Garris). Conversely, there is stuff jammed in we don’t really need, such as a lengthy Vietnam flashback, which could have been replaced with 20 seconds of explanation. The lack of a real antagonist is also an issue. However, I must say, for five million Euros, it looks great, even if the visual side is sometimes as over-stuffed as the narrative. And when it’s in full flow – particularly the pair of airplane attack sequences – then it’s as amazing and excessive as any film I’ve seen this year, with all the gore and gratuitous nudity you could possibly want.

Definitely stick around after the end-credits to get the trailer for Sky Frogs, which will likely be one of my most-anticipated titles of… well, going by the timetable on this one, I’m guessing around the year 2037. You do need a certain tolerance for the trash aesthetic, and a willingness to take the bad along with the good, overlooking the rough edges and performances which are not much more than place-holders. An appreciation of the films to which it nods, and an understanding of the lengthy process by which this came about, will also help. Bottom line: if you liked Iron Sky (and I exclude the sequel from consideration), you’ll probably like this.