Mark (Fisher) has just bought a run-down Western tourist attraction in the middle of nowhere, with big dreams of developing it back up. He travels there with his rather less enthusiastic wife, Jenna (Rubio), to get the process started, and meet with his investor. He’s documenting things to boost the ghost town’s presence on social media, and has roped cousin Justin (Alkhafaji) and his girlfriend Lisa (Lox) to help shoot footage. But the audience knows something is wrong from the start, for the film begins with two lovers getting slaughtered in the attraction’s maze. There is then a caption telling us Mark and Jenna “vanished after posting a series of videos from the town. Their bodies were never recovered.” 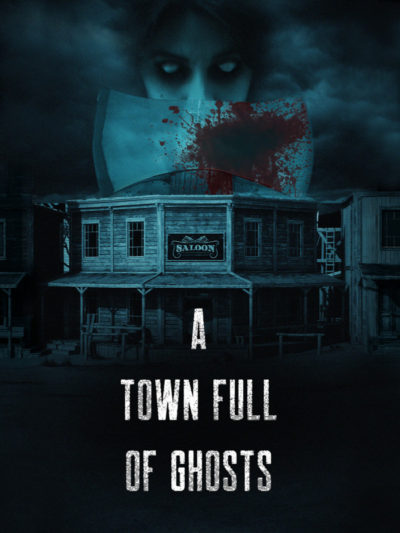 Well, that renders watching the rest of this somewhat pointless then, doesn’t it? Still, we persisted, and over the hour or so that followed ‐ to the film’s credit, it doesn’t outstay its welcome – things unfold, almost exactly as you would expect for the found footage genre. Initially, things appear fine despite Jenna’s qualms. Gradually though, weirdness begins to occur, with unexplained activity and sounds, particularly at night. [Though the creepiest thing, personally, is the wasps’ nest down a side alley, that’s growing at a disturbing rate. This does offer a nice pay-off] When the investor shows up and pulls funding, Mark begins to lose it. Then he finds an old Super-8 film and projector, which he watches, learning the location’s brutal history. This is particularly weird, since we’ve been repeatedly told there’s no electricity out here. Oh, well…

From here, things rapidly degenerate, in the way proscribed by the Gospel of Blair Witch. People vanish, turn up dead and no-one thinks about putting the cameras down, to aid their chances of survival. The severely remote setting does at least explain why nobody leaves – it’s described as being three hours from anywhere. Yet other elements don’t ring true, such as the investor initially agreeing to fund the project, when he had never even been to its place. It is a reasonably creepy spot, and the cinematography is likely better than average for the subgenre. “Not generating motion sickness” is likely sufficient to qualify there though, so it is kind of a low bar.

As well as being reasonably competent from a technical perspective, the performances are adequate, I suppose. Fisher is decent and reasonably charismatic, while Rubio is sympathetic as the clearly long-suffering spouse. The problem is seeing them work in support of a plot that has little new to offer, and fumbles what there is. One example: after watching the film, Mark then describes everything we just saw, an almost ludicrous duplication of effort. If you’re a fan of the found footage genre, then this is potentially worth a look, though it still may feel a little bit too familiar. As someone who definitely does not fall into that category, however, this seemed to have almost nothing to offer in the way of original ideas.