The good news is, this Austrian anthology avoids the inevitable peril of such movies, by being fairly consistent across its three parts. The bad news: it’s consistent in being not very good. At almost two hours in length, it’s ponderous and plodding, rarely short of obvious, and while technically sound enough, doesn’t offer much in the way of surprises, genuinely disturbing content or even likeable characters. 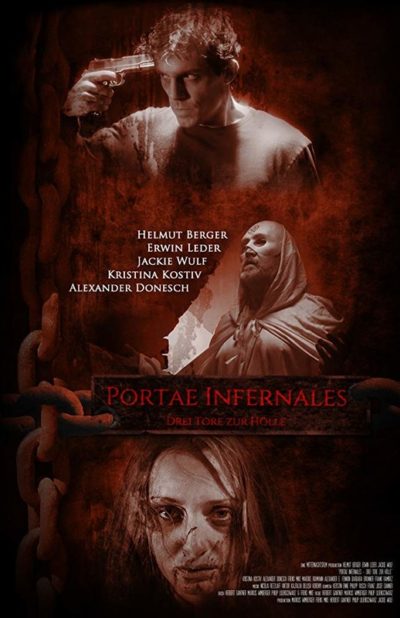 We begin with Inhumanity directed by Gantner, in which a young man, Kaj (Donesch) gets in touch with his inner sociopath, and takes revenge on the teacher whom was cruel to him during his school-days. He brings into his circle a young girl, Katharina (Ruhmann), who seems fascinated by Kaj, for reasons which the film never manages to make clear. He’s not attractive, charismatic, pleasant to be around, or even rich, making her abrupt transition from stranger to enthusiastic and willing accomplice, difficult to understand. Kaj comes over more as a whiny millennial, with little or no justification for his actions: I mean, we all had teachers who were a bit crap, but some of us didn’t grow up to kidnap them. Though I guess this goes to show that even whiny millennials can be dangerous, when pushed to the point that their weapon of choice is no longer a slice of avocado toast.

The next part is The Brotherhood of the Eastern Gate, and about all that needs be said is that it has a character called Professor Satanasius (Wulf), who turns out to be a practitioner of occult arts. You will likely understand how hard my eyes rolled at that. He takes three students for an “architecture seminar” at an ancient castle, which is actually more of an interview and tests, to see which of them are suitable to join his cult. Despite an attempt to add a conspiratorial air, it has more in common with the “suburban Satanist” movies of the sixties and seventies. I could never take those seriously, so this segment feels like about half a century too late. Although it does have less dancing than some, so that’s a relief.

We finish with Agonia, which is certainly the most in-your-face of the episodes, though this is perhaps a bit of a mixed blessing. Lisa (Kostiv) is kidnapped off the street by a pair of thugs, who chain her up in an attic, where she is regularly beaten and raped by a masked man. Her girlfriend, Andrea, starts trying to track her down, and eventually comes across the bar run by the two thugs. Fortunately, she has the skills for the kills, though before we get there, it looks like Rumpelstiltskin shows up to talk to Lisa at one point. The end credits call the character enigmatically “Gnome”, and I’m unsure what that’s all about. However, there’s a difference between not knowing and not caring; as with the rest of this, my reaction skewed heavily toward the latter end.