To start at the end, this film is good, interesting, involving, stupid and an infuriatingly spoiled mess of potential.  Stupid for ‘shout at the screen’ reasons that we’ll come on to, and infuriating because it has a satisfying ending and contains some quietly solid performances.  In fact it’s doubly infuriating because it starts so well that it could very easily have been good film.  But it’s not.

Set in Echo Falls, with presumably a beach not ‘far away in time’, ex-hunter Rayburn Swanson (Coster-Waldau) is an unreformed alcoholic living on the outskirts of nowhere.  Here he is busy killing himself slowly on many levels, whilst also tending to the CCTV-monitored Gwen Swanson (Animal) Sanctuary, which is dedicated to his daughter who has been missing for five years.

We also meet newly appointed Sheriff Alice Gustafson (Wallis) along with her ‘somewhat troubled’ younger brother Brooks (Hero Beauregard Faulkner Fiennes Tiffin) and, to clear the air, there isn’t a bad performance here, with most being at least good.

Their lives are messy, slow, mundane, and all set against a beautiful wilderness that is very nicely shot, as is most of the film.  Oh, and Rayburn has a problematic truck that seems to fail at ‘hilariously’ inappropriate moments and, I guess, this should have been a warning for what was to come. 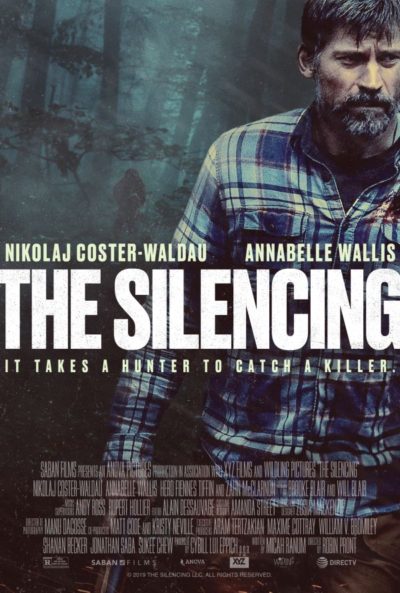 Into this mix is thrown the dead body of a young woman, which understandably vexes Rayburn into some form of coherent action, in seeking out the sheriff to ascertain if it is his missing Gwen.  The waters are further muddied by the jurisdictional boundary and mild friction, between the ‘town’ police and ‘indigenous peoples’ police.

Rayburn is again prompted into action when a man in a ghillie* suit starts dismantling his CCTV cameras.  Which is nearly as irritating for him as being hit in the shoulder by a hand-made spear, launched from an atlatl* by said intruder.

Okay.  Now at this point the wheels start falling off rapidly for, having had someone try to kill him, Rayburn merely stitches up his shoulder, seemingly doesn’t think this nutter may be connected to the dead girl, doesn’t tell the police about anything, and is insta-healed – although, for the next half of one scene, he is seen wincing… …having dug a meaty looking spear from his shoulder about ten minutes ago.  Now I know the ‘iron man’ is a trope of action films, but this isn’t one, and indeed had seemed set on being grounded in some kind of ‘normal world’.  Oh well.  Fuck that!

During the second half of the film you may be tempted to:  a) tear your hair out;  b) shout at the screen;  c) give up all pretence of caring about how any of these incredibly stupid people will fare.  I did the latter two, and will transcribe some notes:

And having been shot in the stomach, after ‘a bit of a lie down’, he’s just fine!  God this is STUPID.  FFS!!!  He’s now scrubbing the floor!?

No-one talks to anyone about important and valuable clues… FFS… or asks any questions like ‘What’s the name of your neighbour?’ (who is almost certainly the killer and who I may know) or ‘Can I use your phone to call the police?’… FU-CK-IN-G HELL!!!

They all deserve to die! & I no longer care.

If you can get over the utter stupidity in a film that it doesn’t suit, the ending is actually quite satisfying, if a little-bit sign-posted.  Sadly however there is no amount of mouthwash that can remove the bitter taste from the back of my throat.  Christ, it is wholly and unnecessarily moronic on far too many levels, and it’s even more infuriating because the players take their roles well, and the aforementioned cinematography is really quite lovely.

Pity.  Wasted potential that promised much.

To show my workings: ‘B+ good, gritty, compelling’ for the first half, ‘E- …FFS avoid like the plague’ for the second half.

Jim, can we make FFS an allowable ‘score’?

* The name ghillie comes from the Scots Gaelic word ‘gille’ meaning outdoor servant, with Scottish gamekeepers attributed for evolving and using such ‘suits’ for hunting.  An atlatl is a spear-throwing lever, very much like those ball-throwers you see dog-walkers using.