This is not dissimilar to my earlier discussion of the original Ghostbusters, in that Titanic is a film of which I was very much aware, without necessarily having ever seen the entire thing in a single sitting. I’d avoided it at the cinema like the plague, having been thoroughly put off by the stories concerning packs of weepy teenage girls watching it hundreds of times. Since then, I’ve bumped into sections on television, and acquired the feeling that Wikipedia’s categorization of it as an “epic romance-disaster film” was about right. The good bits all seemed to be the “post-iceberg disaster porn” aspects. and with a running time of 195 minutes, that wasn’t enough to justify it. 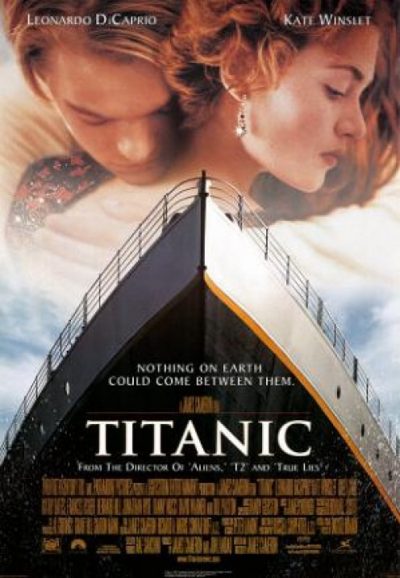 The DVD had been sitting unwatched on our shelf for at least six years, ever since Chris had picked it up at a white elephant party. It was only after stumbling across the very beginning of the film on cable the other night, that we decided we might as well see it without commercial interruption and in its correct ratio. Still took two nights to get through it all, and that’s perhaps for the best. Any film that’s more than three hours long needs a damn good reason, and to be honest, watching DiCaprio and Winslet make gooey eyes at one another does not count. That said, this wasn’t anywhere near as bad as I feared. For pure spectacle, it has held up fairly well, even if it’s still a marked downturn from the man who brought us Aliens and Terminator 2. It does at least avoid the heavy-handed moralizing of Avatar, thank fuck. Three and a quarter hours of that, and I’d be cheering for the iceberg.

The main problem does remain the romantic love triangle between poor boy Jack (DiCaprio), rich but dissatified girl Rose (Winslet) and her rich asshole fiancé, Cal (Zane). It’s entirely unconvincing and thoroughly uninteresting, a banal slice of class-obsessed melodrama. I will say, two decades later, DiCaprio has blossomed into a solid and interesting actor, but at this point in his career, his performance consists largely of impersonating a sad spaniel. Winslet’s issues are more a result of the way Rose is written. You’re barely introduced before she’s trying to throw herself off the back of the boat, and her falling for Jack similarly occurs so quickly, it’s thoroughly unconvincing. In a 90-minute film, this might be unavoidable, but considering how long it is before the iceberg shows up, her story feels like an afterthought.

Fortunately, what saves the film is how well everything else works. I hadn’t seen the lengthy opening, in which Cameron regular Bill Paxton is modern-day treasure hunter Lovett, exploring the wreck of the ship, searching for a priceless diamond. He finds, instead, a drawing of the teenage Rose done by Jack, which leads to a visit from the woman herself. Now a centenarian, she tells the story behind the sketch. This framing flashback is a beautiful way to acknowledge what we already know (spoiler: the ship sinks at the end), while linking it to the present day. It does mean we know Rose is going to survive, losing us a step or two in terms of any suspense there, but then 87-year-old Gloria Stewart, playing the elderly Rose, is so thoroughly majestic, you find yourself glad of that. 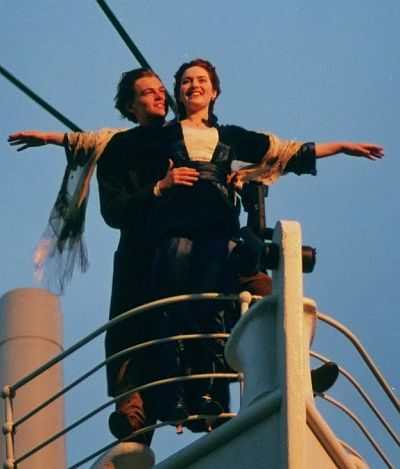 Then we’re back in the period before the Great War, an era Cameron succeeds in recreating in a way which has largely stood the test of time. The main flaw is CGI which, while it seemed cutting edge at the time, has certainly been surpassed since. It’s not the first time for Cameron: both The Abyss and Terminator 2 have suffered somewhat in this regard, while the much more practical work in Aliens has survived better. The same applies here, though you wonder why Cameron built a 90% scale version of the boat, which seems like he’s taking the piss. I imagine him telling 20th Century Fox, “Yeah, we just need a scale model of the boat. Nah, I swear, it won’t be full-size…”

But I think the key to what makes the film work, are the supporting characters. There’s an enormous number of solid performances here, who sketch those they portray with efficient ease. Particular standouts include Kathy Bates. as “The Unsinkable” Molly Brown, Victor Garber as the ship’s architect, Thomas Andrews and Bernard Hill as the Titanic’s captain. It’s here that the film’s epic scope becomes necessary, as there’s a sense of a thousand and one potential stories which could be told. Probably seven or eight hundred of those would be more interesting than that of Jack and Rose. But the leavening of the subsidiary characters definitely make the pre-glacial section better than I was expecting.

Then the iceberg shows up, and the film truly kicks off. Cameron has always seemed a director better able at handling things than people, and spectacle rather than emotions; either this or Avatar are likely the best examples. Though Cameron is very proficient at putting over emotion through action, rather than dialogue. This is demonstrated nowhere better than the montage as the ship’s orchestra plays Nearer My God To Thee, while aquatic carnage unfolds all over the ship. It’s a chilling sequence, and much more effective in its quiet understatement. I found the shot of the elderly couple, embracing on the bed as water floods their cabin, utterly heart-wrenching, especially compared to all the “draw me like one of your French girls” nonsense.

It all ends as you know it does, a deep frozen Jackcicle sliding off the debris on which Rose is floating, and she escapes her marriage to Cal, whom we (off-handedly) discover went on to commit suicide in the Wall Street Crash. Back in the present, the elderly Rose drops the jewel for which Lovett has been searching off the prow of the salvage vessel, and then apparently drops dead in her sleep, to be re-united with Jack and everyone else who drowned. If you turn the film off then, you can escape without having to hear Celine Dion warble. This is strongly recommended.