A group of criminals, under former prison officer Roman (Mandylor), plan to break into the home of a millionaire’s daughter, and kidnap her with the aim of getting a large ransom from her father. But almost as soon as they arrive, just before dawn, things go awry. For the building goes into lock-down mode, with the windows and doors becoming impenetrable barriers, preventing them from leaving. They get and tie up their woman, Nika (Mirela), only to discover she’s also a heroin addict. And a grumpy one at that, as her “cold turkey” reveals her true nature. When she escapes her bonds, Roman and his crew quickly discover they’ve made a terrible mistake in their choice of target. 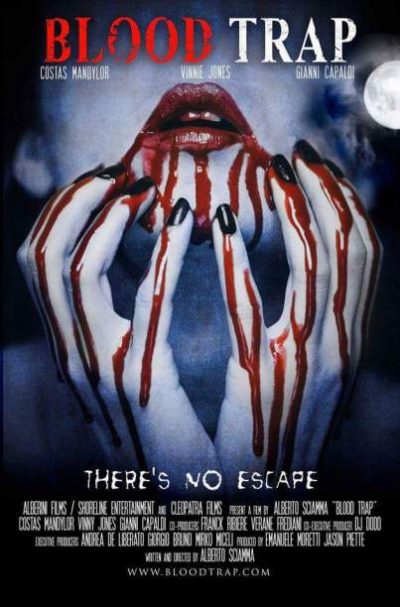 While this is a nice enough idea, my overall interest did about as good a job of making it through to the end as Vinnie Jones. He shows up as one of the gang, having apparently been lured onto the cast with the prospect of a weekend in Italy – only to remember a pressing engagement elsewhere, late on Saturday afternoon. Let’s just say, if you’re looking for a Vinnie Jones film, look elsewhere. The rest of the film largely consists of bickering between and falling out among the thieves, who then make the ill-considered decision to vanish off on their own, for one reason or another. It’s as if no-one here has ever seen a horror film, or they would be aware that “Let’s split up” is about as much a death sentence as smoking weed while skinny-dipping.

I did like the idea that it’s only regular injections of heroine which keep Nika’s inner beast in check, and there’s a creepy subplot concerning a roomful of babies, leading to a scene involving one infant in particular, which needs to be seen more than described. However, there needs to be more sense of escalation; there’s much discussion of Nika’s father, apparently setting him up as the Big Bad, which ultimately comes to nothing. Additionally, the audience will figure out what’s going on a lot quicker than the participants, and you may find yourself suppressing an urge to yell, “She’s a goddamn ______!” at the screen, from comparatively early on in the movie.

I was hoping for something more along the lines of Aliens, which showed what you can do with a small group, trapped in a limited space, and horribly over-matched, going up against an enemy whom they are utterly unprepared to face. Obviously, you can’t expect quite the same thing, and given the resources, this does work\ within its limitations fairly well. Yet if this had managed to capture even a decent sense of energy and pacing, with significantly less sitting around, it would probably have felt less of a missed opportunity.