You have to admire any effort to take a familiar genre and give it a new spin. In fact, this manages to take two familiar genres – the hard-boiled private-eye film noir and the vampire flick – and combine them. If not always entirely successful, it’s an interesting effort and one which sustained my interest rather more than I expected. Hollywood PI Dic (sic) Jones (Horn) is down on his luck, having been dumped by his moll, and down to his last bottle of liquor, when he gets thrown a bone by a former colleague. Dick can redeem himself by solving the case of a messy double homicide. 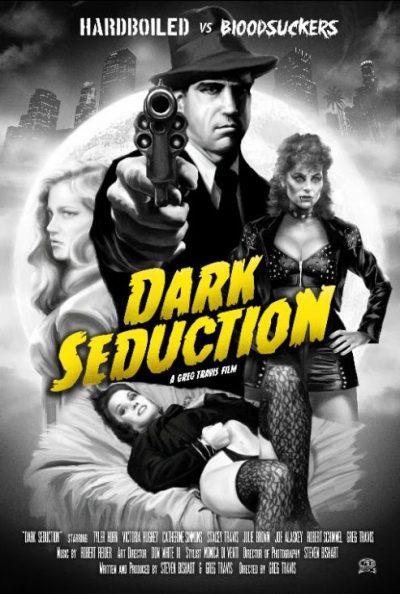 Quite why the cops would do this is never explained, but then, these police managed to miss the unusual tooth wedged in a wall at the crime scene. This puts Dic on the trail of vampires Serina (Simmons) and Vera (Hughey), who are chewing their way through the local community. Before he’s got that far, however, Jones unwittingly encounters and beds one of the vamps, who leaves him with a longer-lasting souvenir from their tryst. This would be a love-bite on the side of his neck, and it doesn’t seem to be healing as it should…

It seems, deliberately, to be mixing up its eras as much as its genres. Dic drives a classic convertible, but there are references to “new wave” and Iggy Pop too, rendering vague the period in which it’s set [probably wise, given the low budget; turning Los Angeles into a specific point in time would not be cheap]. If the hero is out of the forties, and the entire thing is shot in black-and-white too, the two leading ladies seem more inspired by The Hunger. They are all mascara and big hair, like Eurotrash extras on sabbatical from a Duran Duran video;  Serina and Vera’s relationship also seems to take inspiration from Daughters of Darkness. It’s quite a hodge-podge yet the whole ends up, if not more than the sum of its parts, at least somewhere approaching them.

It doesn’t all work, however. There’s a subplot involving Dic rescuing his dame, Laura (Travis), from her current lover, the Citizen Kane like Fatman, which is largely uninteresting and serves no real purpose. One fun fact, is that the Fatman is played by the late Joe Alaskey, a long-time voice actor who provided, among many other things, the dulcet tones of Grandpa Lou on Rugrats and Plucky Duck on Tiny Toon Adventures. Horn brings the right air of world-weary to his gumshoe, but Simmons seems to think that being a bored vampire, means reciting all your lines in a dull and monotone drone. Overall though, more of this works than doesn’t, helped by a script that dryly nails the conventions and cliches of the hard-boiled genre. Credit where it’s due, I never thought the topic of otter’s teeth would make me laugh.