I’m always interested in a brutal take-down of religion, and that’s certainly what we get here, a downward spiral depicting the savage results when faith-based extremism is left unchecked. In rural Pennsylvania, Angela (Smyth) is a health counselor for a planned parenthood clinic, which brings her into direct conflict with Pastor Jeremiah (Twerdum). He brings his pro-life protests, literally to the doorstep of the home which Angela shares – before marriage, no less! – with local policeman Mac (Twerdum). For all his religious zealotry, Jeremiah is not the loosest cannon in his family, since his sister Rebecca (Cross) has lost the plot entirely, to the point of speaking in tongues, after her child is still-born. It’s something the neo-cult believe is God’s retribution on the community for the sin of allowing Angela and her foetus-killing ways. If you think this could end up leading to a fanatical mob with torches, you’re not far wrong. 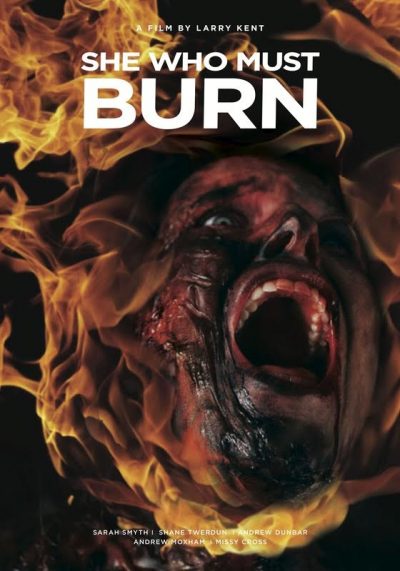 This opens with the murder of an abortion doctor by a Bible-quoting fanatic – though for a second, must confess, I wondered why he was quoting Pulp Fiction – which sets the tone appropriately. It’s about as subtle as a carpet-bombing, though arguably is also as effective, since there’s no middle-ground depicted here. Even those who try to sit on the sidelines, such as the local sheriff, eventually realize you’re either with the religious terrorists or you’re against them. However, things probably aren’t as morally clear-cut as the director wants them to be. Edmund Burke once said, “The only thing necessary for the triumph of evil is for good men to do nothing” – but who gets to decide what counts as “evil”? For once you venture into the muddy waters of faith, things tend to get a lot murkier. When both sides are “killing in the name of love,” as here, who is right?

There’s no denying on which side Kent wants the audience to sit: the side of science, reason and choice. However, his case is hindered by the somewhat bland portrayals given by those in his corner. Smyth and Moxham, perhaps by the very normality of the characters they play, are considerably less interesting than the opposition. Jeremiah, who possesses perhaps the most religious hairstyle in cinematic history, is undeniably charismatic, but it’s Cross’s depiction of Rebecca that hits it out of the park. From the scene where she refuses to accept medical help in her pregnancy, preferring to rely in God’s will, through the harrowing birth scene and on to the burying of the little corpse in the dead of night [chillingly, in an apparent field of other little corpses], you feel her pain, and the subsequent mental disintegration makes complete sense.

I do have qualms about the ending, which could be seen as too deus ex machina to be effective, yet it comes on the heels of a final third where the tone shift from tense drama into outright horror, and is all the more effective for it. Kent is a true veteran, having directed his first feature more than fifty years ago, and that wealth of knowledge helps put together a genuinely disturbing final reel that leaves virtually no-one unscathed by the experience. Least of all, the audience.