The poster calls it “A fucked-up lesbian love story,” and I can’t really fault that as a description. The lovers in question are Mel (Church) and Brooke (Risk), the latter is unstable to the point of lethality, Left to her own devices one day, and unable to contact Mel, Brooke utterly destroys an innocent bystander. And when I say “destroys”, we’re talking raw meat levels of barbarity.  When Mel comes home, to be greeted with this impromptu butcher’s shop, she is relatively calm, or at least doesn’t freak out entirely, as most people would. She opts to make a run for it with Brooke, and thus begins a cross-country cavalcade of carnage. Ooh. I like that phrase. We should get T-shirts made. 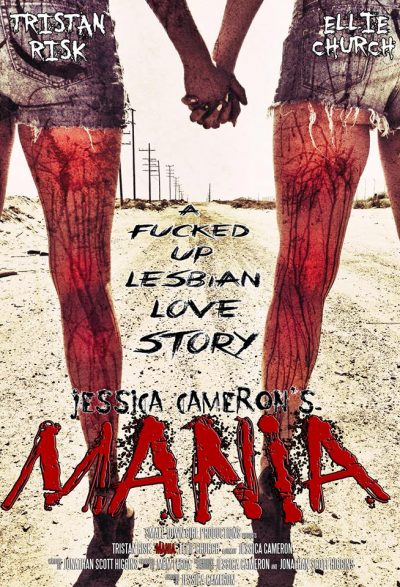 It’s nicely crafted to fit into the limited resources, but outside of some awkward moments of editing, you can’t particularly tell. Any rough edges likely enhance the overall “grindhouse” feel, since this doesn’t skimp on the nudity either – entirely necessary to the plot nudity, I’m sure. However, director Cameron strives to balance all the “lesbian aardvarking”, as Joe-Bob Briggs would call it. There’s a hint of artistic sophistication in a series of surreal dream sequences for Mel, such as the one where she’s the main dish served up for a party of cannibals. I’m not quite sure what these were meant to imply. For a while, I thought this was some indication pointing toward a Fight Club ending, where we’d find out Brooke didn’t exist, and was instead a disassociated part of Mel’s personality.

Part of the entertainment here is the other people our adoring couple meet along the way – some of whom. to be honest, are perhaps even more questionably sane than Brooke.  The thoroughly weird family from whom they liberate an RV comes to mind there. As does the “helpful” passer-by, who comes to their aid after they’ve been mugged. She turns out to have a lovely, OCD approach to impending slaughter, carefully donning and buttoning a plastic raincoat. But it’s mostly driven by Brooke’s increasing descent into violent psychosis – and considering where she starts, that’s one hell of a plummet.

Eventually, even Mel can’t cope with her lover’s disintegration any more, and they seek out legal advice, but he can’t help, as they haven’t actually been charged with anything. Which nods at one of the flaws, likely stemming from the low-budget. For there is absolutely no external reaction to any of this mayhem: No police investigation or media coverage, even though you know, in reality, both would occur on a massive level. Again, this had me wondering whether or not everything was unfolding in Mel’s mind.

I can’t quite be sure if that was Cameron’s intent, but she certainly does a good job of depicting Mel’s own mental decay, with a series of surreal, dreamlike vignettes, which feel like a series of nightmarish out-takes from Showgirls [for damn, those are some industrial-length false eyelashes!]. It’s another indication of an impressively fevered imagination being allowed to run free. While that is occasionally something of a double-edged sword, for a movie made on a relative pittance, more than enough manages to work within the limitations of its resources for this to become an effective low-budget crossbreed of Thelma & Louise with Natural Born Killers.