Rochon has been appearing in genre films for more than a quarter-century, yet this is her directorial debut. If occasionally a little wobbly around the edges, this roughness likely only adds to its off-kilter charms, and you certainly get a new viewpoint on the concept of beauty being in the eye of the beholder. It also offers a time-slice through three era of “scream queens”: Lowry from the eighties, Rochon from the nineties, and the millennial Shepis.

Lowry, who was in Shivers, The Crazies and Cat People, plays aging former glamor model Ginny Reilly, who has been carrying a grudge for decades, ever since losing her position as a cover-girl. This bubbles to the surface when two cheerleaders from the local school come by on a fundraising visit. Unimpressed by their attitude, especially toward her favorite show, Suzi’s Secret (which we’ll discuss more, in a bit), she drugs, kills and cooks their flesh. Meanwhile, recently moved in next door are the Lombardos. Debbie (Shepis) is recovering from mental illness, with a largely unsympathetic husband (Capobianco) and is increasingly suspicious of Ginny. Unable to get the local cops to take her seriously, she ends up taking the investigation into her own hands. 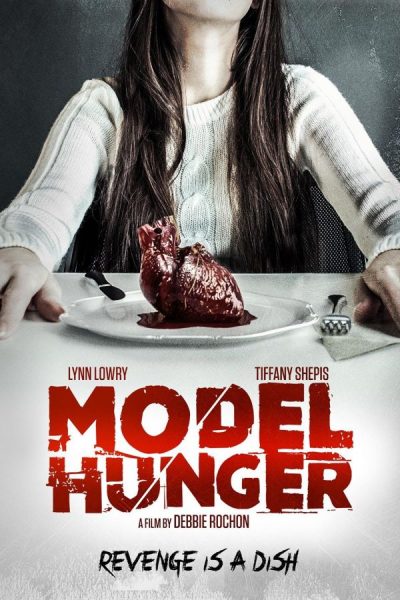 Lowry nails it, utterly. On the surface, her character seems like a sweet lady, descending gently toward her twilight years. But her foul-mouthed inner monologues form a sharp contrast, depicting a bitterness at her own fate, which has transformed into cruelty, and a hatred for those who take beauty for granted – or have a different perception of it. Which is a bit of a moral grey area. You could argue the case that any insistence that “fat is beautiful” is just as much body fascism as those who equate beauty only with thinness. The truth is, as usual, somewhere in the middle. There’s no reason beauty need only exist in size zero. However, I don’t find either extreme aesthetically appealing. There is “too fat”, just as there is “too thin.”

Which brings me to Suzi’s Secret, Ginny’s beloved show, in which the titular host showcases fashions for women of a fuller size. This is, apparently, essential viewing for many in the town, even the likes of car mechanic Verrit (cult musician Voltaire, in a cameo). Suzi is played by another scream queen, Suzi Lorraine, wearing a fat suit, which given the philosophy of the film, seems a tad hypocritical. Similarly, her main model is drag queen Babette Bombshell (think the corpse of Divine, dug from the grave and brought back to life. That’s more a compliment than it sounds). Couldn’t they find genuinely large actresses? It’s also an element that is used frequently, yet never seems to go anywhere much. I was waiting for some payoff, e.g. Suzi turns out to be Ginny’s sister, that never arrived.

Fortunately, there’s more than enough worth appreciating in the rest of the film to overcome this. Beyond Lowry, it’s also an unusual role for Shepis, who is shot in a way that renders her relatively plain, a distinct change from her more traditional role. There’s one scene, where she’s the recipient of some shocking news, that also showcases her acting ability. We’ve often praised that aspect of her talent before, and while this moment does seem a little out of character for the film, it’s a worthy addition to her showreel. Rochon doesn’t skimp on the cruel punishments Ginny inflicts on her victims, peaking with a bit of radical surgery she performs on a young Jehovah’s Witness who has the misfortune to come knocking on the wrong door. Suffice to say, it’s a repellent spin on the Biblical line, “If thy right eye offend thee, pluck it out.” 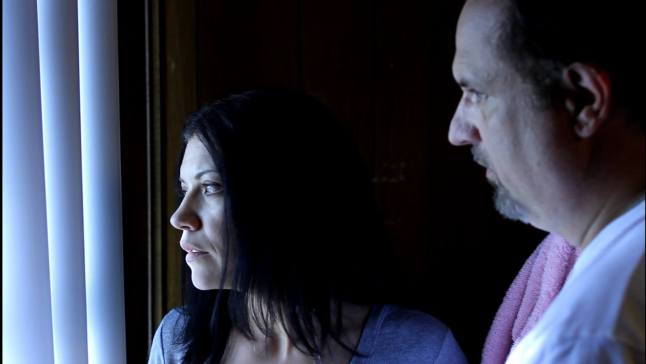 The main demerit, technically, is the visual aspect, with camerawork that is sometimes wobbly for no apparent reason, particularly in a few early scenes, and you generally should accept this is not going to be a slick, big-budget production. However, the plus side includes a score by Harry Manfredini, who did the original Friday the 13th film – appropriate, since there’s perhaps a little Pamela Voorhees to be found in Ginny as well. But in terms of combining exploitation and social commentary, her closest cousin may be Thana in Ms. 45. As there, you start off feeling sympathetic for the heroine’s “feminist” actions – yet as things proceed, you realize she has lost all grip on any credible motive and is, in fact, bat-shit crazy. [Both also end with another woman being the cause of their downfall, albeit in very different ways]

There’s no denying, you can easily pick at this and find a good number of ways it could be better. Yet, for a first directorial effort, it gets so much absolutely right, beginning with casting leads who bring far more to the table than many well-known names. Rochon has made good use of the connections made over her decades  in the industry. You could argue with both the message and the approach taken to it; yet it remains an independent horror film that possesses an actual philosophy and offers genuine social commentary. This is something not frequently seen in a genre, where the brain is generally only of interest when exploding out of someone’s skull.