Fern (Paul) is a psychic in the small town of Buffalo, Iowa – whose sole famous citizen, Wikipedia tells me, is WWE wrestler Seth Rollins. This tells you all you need to know about Buffalo, Iowa. Fern is not a great psychic. She’s barely even a good psychic. She can see ghosts, sure, and the spirits of the dead are all around. It’s the “communicating with the dead” bit of being a medium she sucks at: they largely ignore her, sitting around playing cards or making sardonic remarks. She’s also a bundle of neuroses and odd quirks, such as fainting every time she sneezes. Or is it sneezing every time she faints? Could be either. 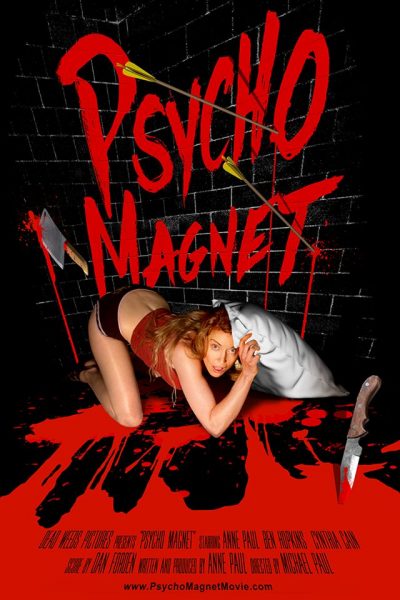 But the main weirdness, for the purpose of this film, is that everyone Fern meets seems to want to kill her: she brings out any latent psychopathy in everyone she meets. We see this in particular when a seance at a local house is attended by husband-and-wife serial killers Cherry (Cain) and Denny (Hopkins). Cherry has a fondness for archery – which explains the large number of local ghosts with arrows in them – and sets her literal sights on Fern. The psychic manages to survive, accidentally killing Cherry in the process. But this sets Denny, who had largely been the passive, body-disposing side of the team to that point, on a quest for revenge.

The film could probably do a better job of explaining the above, since beyond the title, it’s never made clear why Fern seems to bring out the worst in people. This is most apparent when Denny has her tied up above his mechanic’s shop. One of his employees stumbles across her there, but rather than freeing Fern, decides to torture her further. It’s a strange act, until you remember… Psycho magnet. Something similar goes for her relationship with the spirit world, whose rules you have to work out for yourself. It’s a slab of unnecessary effort for the viewer that could have been saved with some introductory exposition, setting things up.

Still, I found it worth the work, since Fern is a wonderful character, mostly because she’s carefully crafted to be the worst “final girl” you’ve ever seen. Yet, somehow, despite possessing adorable incompetence in virtually all areas, she manages to prevail and that’s where the more comedic elements come into play. Seeing her get into and out of these scrapes is not unlike watching a 21st-century slasher version of The Perils of Pauline. You find yourself rooting fervently for Fern, for example, as she rehearses for a confrontation with Denny. It involves much wild flailing, and is utterly charming.

Like another festival film, Model Hunger, this is the kind of production which marches to the beat of its own drum, in both style and content. As such, it might not be for all tastes, and you probably have to be tolerant of its foibles, like an eccentric yet beloved relation. In some ways, it is almost a willfully anti-horror film, though it took me three viewings to figure this out. For instance, there’s a scene at the end where Fern has discarded her blood-drenched clothing and after a slo-mo shower under a garden hose, looks set to turn into a red-headed version of Tura Satana and drive off in a purloined sports car. Except… Not quite.  Similarly, the pacing certainly takes its own damn time before the first on-screen kill takes place.

Things do perk up significantly there in the second half, with Fern staggering from one disaster to the next, leaving a trail of more or less accidental corpses behind her. But what’s most important is, this has character, something I find severely lacking in most Hollywood movies, which are far too slickly soulless for their own damn good. In contrast, the passion with which Psycho Magnet was made is entirely evident. The ending hints at a sequel, and I’d certainly love to see the further adventures of Fern, blundering her way through the world like an extremely clumsy angel of vengeance.