Not quite what I was expecting. Not sure what I was expecting, mind. Probably something involving outer-space stuff: except for the final few moments this is resolutely earth-bound. It plays more like a reverse version of The Shape of Water: rather than a woman gradually falling in love with a fish-man, it’s a woman falling out of love as her man gradually turns fishy. And there’s nothing natural about the transformation here. It’s a scientific project, led by Professor Martin Collingwood (Wilkinson), with the aim of creating colonists who’ll be able to stand the harsh conditions of Saturn’s moon Titan. 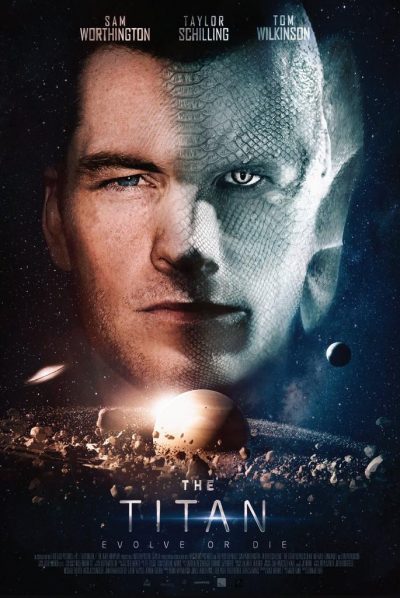 This is necessary, because Earth is rapidly heading toward disaster, and an alternative home for humanity is needed. [Though one of the weaknesses is, we’re never shown much evidence of the apocalypse. Everything looks fine, outside of newsreel footage saying California is uninhabitable. So, no change there, then…] Among the subjects are Lieutenant Rick Janssen (Worthington); his wife Abigail (Schilling) is a doctor, and so rather uncomfortable with Collingwood’s work. Especially when her husband begins to change. I mean, the peeling skin and rages are one thing, but it’s just a bit much, when he starts referring to sex as “spawning”. Okay, I made the last one up.

There are a couple of ways this could have ended up. We could have gone the “creature on a rampage” route, like The Quatermass Xperiment or Species II. Alternatively, we could have taken the “sympathetic monster” route, like some versions of the Frankenstein myth, or even The Fly. However, the film is unable to decide on an approach, and ends up just sitting there on your screen, as if waiting for instructions from the viewer. The film’s focus gradually changes from Rick to Abigail, which is a bit unfortunate: if I’d realized that was going to be the case, I might have paid attention to her earlier on, rather than writing her off as the Dutiful Wife trope made flesh.

However, this shift in direction was probably a necessary move. Worthington isn’t exactly a master of emotions at the best of times: he’s fine when being physical, as in Spartacus or Clash of the Titans, it’s when anything more is required that he struggles. As his modification proceeds, he gets increasingly buried under layers of latex, and the volume of acting which makes it through, approaches zero as a limit. You’re left to guess exactly what emotion he is trying to express. Rage? Sadness? Ennui? Could be any or all of them. Spin the Wheel O’ Worthington Expressions, and see where it stops! The ending may be the most ridiculous thing about the film, as we suddenly leap over the entire “journey to the outer half of the solar system” issue to… well, you have to see it to derisively snort in disbelief. Though by this point, dumping Rick out on Titan is probably best for all concerned. After all, it’s not like there are any rescue shelters on Earth for half-men, half-fish with anger issues.