Where I work, they now play Spotify over the PA system during the day. It’s not something I like, mostly because my tastes are not exactly reflected in 99% of the playlist, although it has convinced me I’m correct in believing that modern music sucks farts out of dead dogs. But worse than having someone else’s choice of tunes inflicted on you, is when my co-workers decide to start singing along, drumming, etc. This is not a fucking karaoke bar, you twat, and you are not Neil Peart. Shut the hell up and just do your goddamn job. Unfortunately, a lot of Baby Driver reminded me of this: I felt like I was trapped inside Edgar Wright’s iPod, while he hummed along to his own mix-tape. This is not far from what I suspect hell would be like. 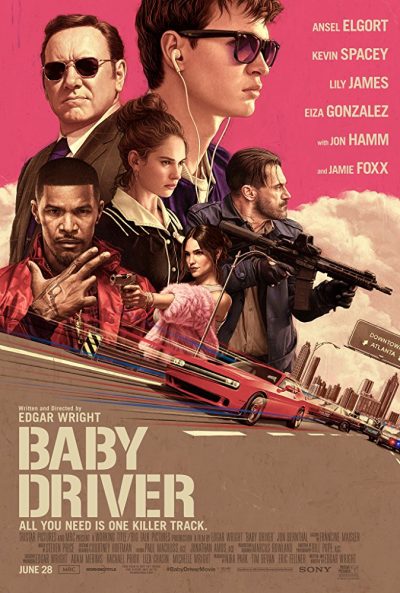 There are a lot of the same problems here as in Scott Pilgrim vs. the World: rampant and unrestrained self-indulgence, like the worst excesses of Quentin Tarantino. It’s no surprise that the Academy Award nominations it received were entirely in the editing and mixing categories, because the pleasures here – while certainly existing – are entirely as a technical exercise. The lead and script certainly don’t deserve any prizes. Indeed the problems start with lead Elgort, who gives the kind of annoyingly vacant, pretty-boy performance which I previously thought was solely the territory of Michael Cera.

He plays “Baby”, a tinnitus-affected youth – hence the perpetual soundtrack to which he listens – who is a master driver. He’s under the thumb of Doc (Spacey, back before film-makers would gouge out their own movie, rather than have him in it), a crime boss who is leveraging Baby’s talents as a wheel-man on his heists. Baby takes care of his deaf-mute foster father, and hangs out at a diner where he bonds with waitress Debora (James, a perfect foil in vapid Manic Pixie Dream Girl emptiness for Elgort). But, inevitably, Baby’s efforts to leave the criminal underworld after the battleship-sized cliche of “one last job” fall on deaf ears, leaving him needing to drive his way out of trouble, if he’s to get his happily ever after into the sunset with Debora.

More interesting than the central pair are Doc and the plethora of oddballs who form the roster from which he draws the teams for the heists. While far too much loose cannons to be credible career criminals – they’re more cut from “one and done” cloth – they have life to them, which Baby is lacking. He’s a soundtrack CD made flesh, nothing more. The choreography, with characters’ actions often matching the beat of the music, is impressive, and I get where Wright is coming from. I use to march round London in the nineties with my Walkman headphones on, imagining my life with its own soundtrack. But I didn’t inflict it on anyone else, and nobody sure as hell gave me $35 million in order to do so.