Back in the nineties, before Twilight came sparkling along to screw the bloodsucking pooch for everyone, there was the Subspecies franchise. It consisted of four films, plus spin-off Vampire Journals, all directed by Nicolaou, and was one of the cornerstones of Full Moon Features. While set in the present day, this opener in the series feels almost like a throwback to Hammer. If it’s no great shakes, especially in the performance department, it certainly benefits from being one of the first forays by Hollywood into Eastern Europe. Shot in Romania, home to the legend of Dracula, this adds a big dash of flavour. Probably not quite enough to avoid looking like an early nineties, straight-to-video horror film, unfortunately. 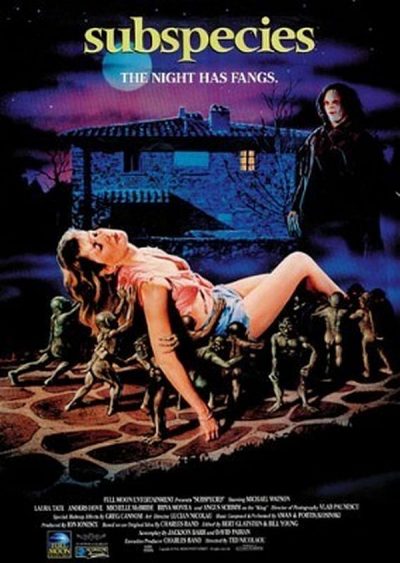 It begins with a prologue in which young vampire, Radu (Hove), offing his father (Phantasm‘s Angus Scrimm in a two-minute cameo), because… Uh, not sure: I was already distracted, because Radu looks like a cross between Max Schreck from Nosferatu, and Tim Burton after a three-week bender. I think it was maybe something to do with the “Bloodstone,” a gem of great power, despite looking like a raspberry Ring Pop. Anyway, moving on: US college students Michelle (Tate) and The Other One (McBride) meet up with their friend The Romanian One, for a summer spent going round semi-ruined central European buildings. Such fun! At least there’s hunky local Stefan (Watson) hovering broodily nearby.

But, wait! Turns out Stefan is Radu’s brother, and there’s going to be a vamp fight over who gets to possess the Bloodstone and become King of the Vampires or something. Michelle ends up in the middle of it all, while The Other One and The Romanian One… Well, might or might not survive to the end credits, shall we say. But since they’re almost entirely unimportant, it doesn’t matter. It’s this aspect of a struggle for a good woman and her soul, which reminded me of Hammer, or even the original Bram Stoker story. In these post-Twilight days, an old-school approach is refreshing, and Nicolaou makes good use of the exotic setting, in particular, a festival with the locals wearing masks. I don’t know whether this was organic or created for the film – either way, it’s effective and creepy.

Still not enough to overcome the numerous problems here, though. The main one are performances which, outside of Hove, are lethally bland and uninteresting. There are also times when the resources are nowhere near being able to come up with the ideas. Witness Radu’s stop-motion minions: it’s hard to see how these could ever have passed muster, even in the early nineties, when viewers were rather more forgiving. [At that point, we were still not far removed from the idea of moving pictures in your own living-room being some kind of dark magic] It’s really a case of one step forward, two steps back for this film. Every time it seems to be gaining momentum and is at risk of becoming genuinely entertaining, it’ll grind to a halt, and the flicker of interest is extinguished.