For the longest time, this film had been ruined for me. It had held a special place in my heart, having been the first “mature” film I saw at the cinema, with all the heady delights an ‘AA” certificate could provide. As far as my teenage self was concerned, that meant Igrayne’s breasts, copious amounts of blood, and the bit where a bird pecks out the eye of a hanging man. Best. Film. Ever. 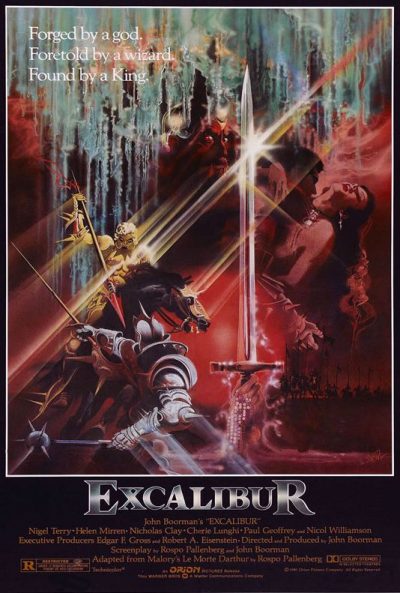 Then I saw Monty Python and the Holy Grail. All of a sudden, it was impossible to watch Excalibur and take it the slightest bit seriously. Even though Grail was made six years earlier, it seemed like a pitch-perfect spoof, down to individual scenes and lines. Any viewing of Excalibur turned into a rampaging quote-fest, yelling “It’s only a model”, “None shall pass!” or “What is the air-speed velocity of an unladen swallow?” at the screen. Even Igrayne’s breasts lost their shine, becoming kinda creepy after I discovered the actress carrying them was actually the director’s daughter. But something has happened since my last viewing, a decade ago.

And that thing is Game of Thrones.

I met Helen Mirren and told her that the first R-rated movie my dad took me to was Excalibur, and she was like, “Did you enjoy my breasts?” I was like, “Yes, yes I did.” She is amazing.
— Patton Oswalt

Epic, mythic fantasy? Check. Heavy on the sex and violence? Check. Incest? Check (even beyond the Boorman thing, here we have Morgana Le Fay, seducing her half-brother Arthur). They were both filmed in Ireland, too. Seen in this light, Excalibur has handled the passage of time rather well. Through the lens of Westeros, it now feels three decades ahead of the curve, and simply short a few dragons and Peter Dinklage.  Him aside, it’s still a staggeringly impressive cast: Boorman could certainly pick ’em. Watching this is like a episode of Before They Were Famous, featuring young versions of future household names. Helen Mirren plays Morgana – her costumes include the fetching battle bikini shown top! – while in roles as knights are Patrick Stewart, Liam Neeson, Gabriel Byrne and Ciarán Hinds (the last making it into Thrones too).

Among the more front-line participants, credit particularly Williamson for a highly self-aware Merlin. His dry delivery keeps at bay the bombast which inevitably lurks, whenever a film-maker decides to use Wagner on their soundtrack. It’s an interesting choice to have the same actor (Terry) play Arthur at all stages of his life, from the young naive squire that pulls the sword from the stone, through to the embittered old man, betrayed by his best friend and his true love. I can’t say they are all equally effective, yet it does provide a necessary continuity to the story as it unfolds over the course of decades. Clay as Lancelot is pretty yet largely forgettable, though the scene where he yanks a sword out of his own side is still wince-inducingly good. 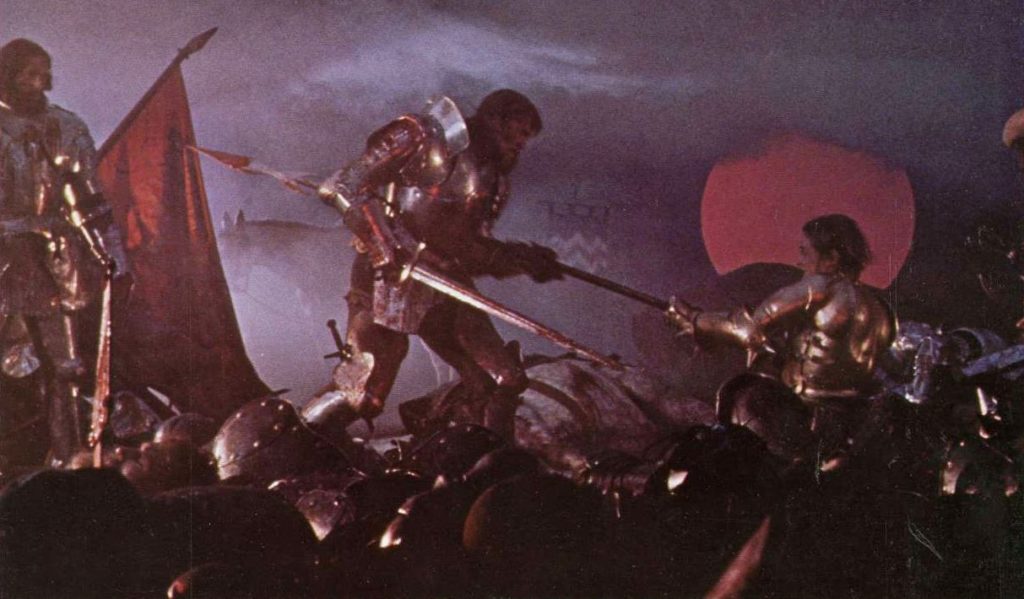 Boorman’s career was already all over the place thematically, including Point Blank, Deliverance, Zardoz and the spectacular misfire which was Exorcist II: The Heretic. One can only imagine what his proposed adaptation of Lord of the Rings, with which he corresponded with Tolkein in the seventies, might have been like. Perhaps Excalibur gives us a clue. Certainly the look of the film is stunning, contrasting dark, wild landscapes with armour so incredibly shiny, I’m surprised I couldn’t see Boorman’s reflection in it. It’s a shame cinematographer Alex Thomson only got an Oscar nomination, losing out to Reds, far less epic in photographic scope.

This version has endured, where subsequent efforts at retelling Arthurian legend have been forgotten – mercifully in many cases. Yes, I’m looking at you, First Knight. I’m probably the only person who liked King Arthur, while the disastrous implosion which was Guy Ritchie’s King Arthur: Legend of the Sword last year proves both the enduring appeal of the fable, and how hard it is to get it correct. [Although I’m not sure making Sons of Anarchy: The Camelot Chapter was necessarily the best approach for Ritchie…] While Excalibur doesn’t get everything right, being a good half-hour too long, even when it goes wrong, this remains a medieval banquet for the eyes.

Of course, there are still times it is physically impossible to resist quoting Holy Grail. I doubt that will ever evaporate entirely. And, to be honest, I wouldn’t have it any other way…