A rather drastic retitling from the Mexican original name, which translates as “Return”. The new title perhaps makes a little more sense, referring to a fairy tale written by the young heroine, Estrella (Lara) at her school, shortly before a shooting incident brings classes to an unexpected and semi-permanent end. For violence is a part of her everyday life: the journey home is diverted, due to a body lying on the pavement, just another victim of the violence resulting from the drug trade. Things go from bad to worse for Estrella, as her mother has simply vanished from their home – another frequent occurence. She seeks shelter with a gang of street orphans, led by Shine (López). But their status is perhaps even more tenuous, due to Shine having stolen a phone belonging to a member of the Huascas, a gang deeply embedded in the city and its violence. On that phone is evidence incriminating Chino (Huerta), a man now running for political office, and he’ll stop at nothing to recover it. 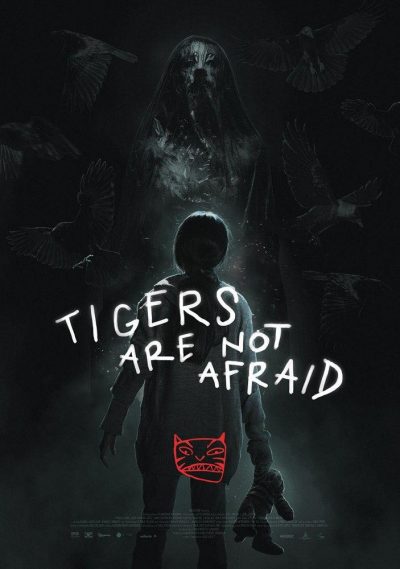 All of which should be enough for any film – yet this synopsis entirely leaves out the fantastical elements. Estrella is given three pieces of chalk by her teacher, and told they each confer a wish. She is followed by animated trails of blood, and haunted by visions of the dead, as well as her missing mother. They all give this the feeling of an early Guillermo Del Toro movie, in particular, Pan’s Labyrinth, with its combination of elements bordering on the occult, against an ever-present undercurrent of potential violence, told from a child’s perspective. And, much as there, I didn’t feel the fantastical elements added very much to the proceedings, instead adding a distancing effect which softens the impact of a world where life can be terribly nasty, brutal and short. If offering an understandable coping mechanism for the heroine, there were indeed a couple of moments where they felt so ludicrously contrived, I was taken out of the film entirely.

There are points where it admittedly does succeed, not least the ending, where Estrella walks through a door into… Well, let’s not spoil it, and just say that there, the fantasy worked as it should, enhancing the impact of the moment. For most of the remainder, I was more interested in the grim reality of this life, in which Shine and his friends have to make a new family together, after having lost their one. It’s a clan bonded by “all the bad things,” and fiercely loyal to each other as a result. The dynamics at play within the group – not least their reaction to Estrella – is fascinating. She’s initially seen as an outsider, then suddenly becomes almost a deity, due to an incident that she (more or less consciously) manipulates to her advantage, until the truth about it is revealed. It offers plenty to explore, without the need for any teddy-bears to come to life.