Coulrophobia is the fear of clowns. This is a bit of a strange title, since it is considerably more intellectual than anything the film has to offer. This is an entirely straightforward tale, in which a group of roller derby girls, on a camping weekend in the “Scottish highlands” [quotes used advisedly – more on which later] are captured by a family of clowns living in the woods. As a former resident of those “Scottish highlands”, I can testify this is a frequent occurrence there. You could hardly go for a nice walk without being harassed by large groups of whey-faced individuals wearing extremely large shoes, all piling out of the same car, with abduction in mind. 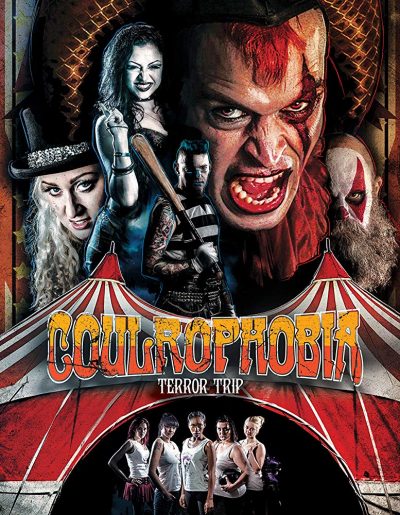 This manages to pull off the unusual feat of simultaneously having too much going on, and not enough. Early on, it feels like there are three separate movies, involving the derby girls, the clowns, and their uncle, who provides the back-story as to why they’re hiding out in a forest to begin with. Eventually, these end up merging, and the problem switches to the film effectively grinding to a halt, as the girls are subject to various indignities – most of which involve their tops popping off – at the hands of their captors. There’s no real sense of escalation, things just meander on their way towards an ending which, I have to admit, I did not see coming.

The only significant twist in this odd combination of killer clown and rural nightmare genres, is the arrival of Dad. He shows up looking like a low-rent version of (the late, lamented) Sid Haig as Captain Spaulding. However, it’s not entirely without merit. The clown family are actually fairly fun to watch, with all the players going at it with the necessary gusto. They’re led by Bennett as jester from hell, Twitch Grock, ably assisted by Bordeaux as his relentless perky sister, Gretchen. Though likely the shot you’ll remember most, sees director Speed, playing mute Milo, getting an open wound on his dick attended to.

But each of the Grock family have their own individual characters and persona – which is considerably more than can be said for their victims. They might as well have referred to the members of the “Northern Skull Punks” team by their numbers, such is the generic nature of the portrayal. Not that roller derby plays any significant part in proceedings here either: beyond the bookend footage, they could be students, waitresses, nurses or strippers.

Oh, yeah. Almost forgot that “Scottish highlands” thing. I’m pretty sure the makers lazily didn’t bother to make it north of the border at any point, beyond possibly editing in some drone footage of random coniferous forests. Because there’s not a single person here sporting an accent that isn’t more Northumberland than Inverness, and as whole it has absolutely no sense of location. I’m fairly certain the whole thing was filmed within day bus-pass distance of Newcastle. And that’s a shame, because if there’s anything more scary than psychotic clowns, it would be psychotic Scottish clowns.