I was confused right from the start, as despite the title, the theme song very clearly features Hayes crooning about “two tough guys.” I fondly envisage a scenario where Fred Williamson came up to the producers and complained about the title apparently not considering him tough. And when The Hammer tells you to do something, you do it. Because he’s The Hammer. Actually, unlike Wikipedia, the IMDb calls it the less-specific Tough Guys, which works regardless of any numerical insertion in the theme’s lyrics.  The other interesting thing is it’s almost but not quite blaxploitation. While it has all the trappings of the genre – not least, Williamson, Hayes and a funky soundtrack – the star and central character is Venture. He’s not just un-black, he’s not even American, being Italian playing an Italian priest. Is there a genre for that? Maybe pastasploitation, riffing off the whole “spaghetti Western” concept? 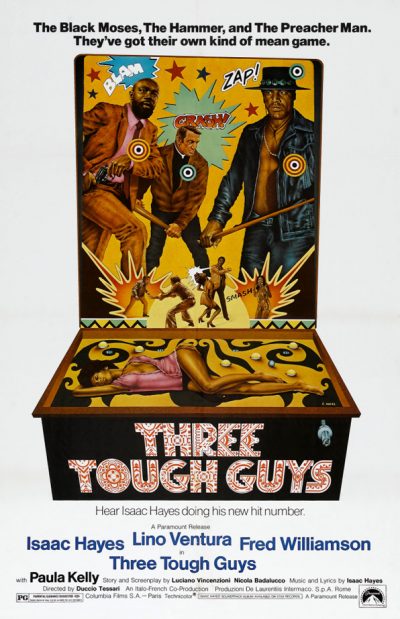 Anyway, ex-soldier and ex-jailbird Father Charlie (Ventura) is pulled in after a parishioner is gunned down. The victim was an insurance investigator, looking into a million-dollar robbery, but the cops are largely uninterested, believing him probably to have been on the take. So Charlie takes up the case, only to find the perpetrators are rapidly tidying up loose ends. Fortunately, he has help in the form of Lee (Hayes), a former police captain, drummed out of the force for leaving his post due to a frantic call from his girlfriend, Fay (Kelly). That absence helped allow the robbers to commit their crime, so he’s keen to find them as well and clear his own name from a cloud of suspicion.  They team up – and they need to, since the local mafia, as well as Joe Snake (Williamson) and his gang, are running interference.

Charlie makes for an appealing hero, not least because his preferred method of transport is the very non-blaxploitation and unheroic bicycle. It’s an endearing character quirk that helps bring him to life, along with his “tough love” approach to the kids in his neighborhood, establishing the priest as someone who takes no shit from anyone. Though known as a composer, this was Hayes’s first feature-film role. but you probably wouldn’t know it, as he displays a calm self-assurance that works equally well. Williamson completes the titular trio, yet in terms of screen time, he’s very definitely third of the three, and doesn’t appear to do much until Lee and Charlie catch up with him.

That’s the main problem here – the film’s plot never manages to be as interesting as the characters. There is extremely limited effort to cast doubt as to whether it’s the mafia or Joe Snake who carried out the robbery. However, the former are a thoroughly unconvincing bunch despite the presence of veteran actor Vittorio Sanipoli as the head of the family. Besides, you can basically tell from the title who’s responsible here: The Hammer don’t play red herrings. Providing you’re prepared to tolerate this simplistic plot, it’s still not an unpleasant experience, thanks to the charisma of the leads, and just about manages to skate by for 90 minutes on the strength of that.