There’s always an issue with films about video-games. Not films based on video-games; those have an entirely different set of problems to handle. But films which incorporate the playing of video-games into their narrative, have particularly to deal with transforming this participative experience into a passive one. What’s lost there has to be replaced in other departments, for example, by amping up the visual aspects. Unfortunately, Black Heaven doesn’t do a very good job at all of that: its in-game sequences are largely spent watching hero Gaspard (Leprince-Ringuet) jog around a largely deserted and fairly uninteresting city. Which is a problem, because a major aspect is how obsessed he becomes with the game. When that falls short of convincing, the rest of the plot is left on shaky foundations. 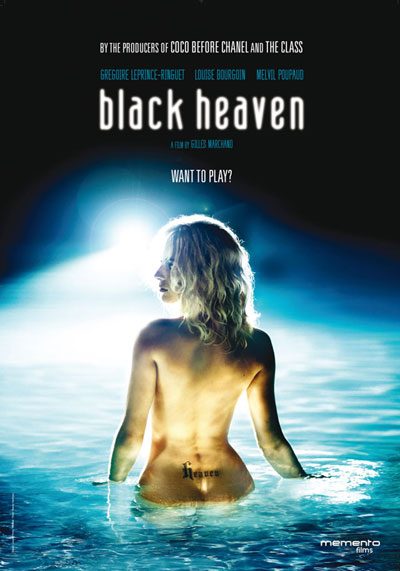 Everything starts when he and new girlfriend Marion (Etienne) find a cell-phone with mysterious messages and pics on it. For a goof, they opt to follow its owner, only to find him involved in a suicide pact with blonde Audrey (Bourgoin). She survives; he doesn’t. It turns out to be a result of their encounter in an online multi-player game, “Black Hole”. Gaspard logs on, in search of Audrey’s online persona, “Sam”, and becomes increasingly involved with her, both in the game and in the real world, obeying her instructions, even to the extent of breaking up with Marion. The question is, are her apparent feelings for him genuine, or is he being drawn in to follow the same path as Audrey’s previous companion? For Audrey’s creepy brother, Vincent (Poupaud), seems to have a more than normal degree of control over her.

It seems to want to be a sexy thriller, but mostly comes off as making not much sense. The speed with which Gaspard goes from not even knowing what Black Hole is, to sneaking off from Marion for midnight assignations with Sam is unconvincing. Motivations are generally unclear too: it’s never explained what Audrey is getting out of these near-death scenarios. Bourgoin certainly makes for an effective sex-pot, to the extent she feels almost like a CGI creation herself, right down to the “Heaven” tattoo on the small of her back. You can see the exotic allure for Gaspard of this mysterious and enigmatic blonde, especially when contrasted with the more mundane Marion.

I kept watching, in the hope the build-up would lead into some kind of pay-off, or even some kind of significant lesson about the difference between reality and the online world. It doesn’t happen, instead petering out into a roof-top climax that virtually (hohoho) poses more questions than it answers. I wouldn’t call this an entire waste of time, for there’s a certain sense of Gallic style and location that managed to sustain my interest. However, it needs to do rather more with its premise, and tighten up the script several notches. For the pacing is so slow that most of the audience will likely consider going off to play Grand Theft Auto before this is done.