This was included in one of those bargain DVD collections on which I used to splurge: I think, in this case, using a Best Buy gift-card I got for Christmas. In this case, the 20-film Grindhouse Experience set, a bunch of which titles have previously been reviewed here, most recently Mean Frank and Crazy Tony. What’s interesting is they pair similar films up, so you get two disaster films, two women-in-prison movies, etc. This was the second kung-fu film, following the execrable Kung Fu: The Punch of Death (a.k.a. The Prodigal Boxer), which I tried to watch twice, and failed on both occasions. And I’m not someone who exactly quits on bad movies. 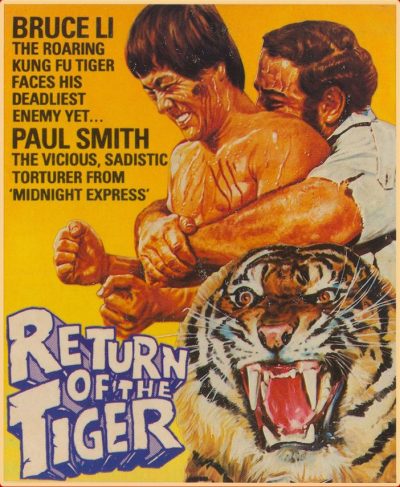 But what it did, was act as a contrast to Return, and show that there is actual art involved in what could easily be derided as “chop socky” movies. Seeing the bad – and Punch was very, very bad – gives you an appreciation for the simple things Return does well. Such as having a plot that is more than the hoariest of cliches: “You killed my father. Now, here’s a training montage.” Return is as close as I’ve seen to a kung-fu version of A Fistful of Dollars  (a remake of Akira Kurosawa’s Yojimbo, of course), and it’s this genuinely interesting plot which lifts the film far and away above Punch.

Chang Hung (Li) and his partner (Mao) show up at a training school belonging to gangster Mr. Shaw (Smith). They kick his low-level minions’ asses, and eventually tell Shaw they’re here from Amsterdam to avenge the death of Chang’s father. Which confuses the hell out of Shaw, as he’s never been to Amsterdam and doesn’t know who Chang is. He sends further henchmen after Chang; their failure attracts the attention of Shaw’s rival, Mr. Sing (Lung), who figures that the enemy of my enemy is my friend, and seeks to recruit Chang to his gang. To say more could spoil it; let’s just say, there are some genuine surprises here.

Indeed, the fact there are surprises are surprising in itself, because your basic martial arts film tends to have about as much plot as a porn flick – and, to similar purpose. You watch both for less than high-minded entertainment, and seek something that engages the lizard portion of the brain. If that’s satisfactorily achieved, plot is superfluous and perhaps even gets in the way. It’s time which can be spent on more energetically physical pleasures. Even classics such as Enter the Dragon, Police Story, etc. are less stories than thin excuses to link fight scenes, and I’m perfectly fine with that.

Not that this script is exactly flawless. Witness the scene where Chang randomly goes to a goods yard. Shaw’s thugs show up, pleasantries are exchanged, then everyone hangs around while a shipping container moves, at the pace of a glacier, down the length of the yard and is lowered to the ground. A torrent of Sing’s men spill out, and after a quick brawl cause Shaw’s group to retreat. Sing’s men then return to their container, like the minion version of a clown-car. Or the sequence where Chang, out in the middle of nowhere, is ambushed by a gang of bikers, and fights them off in this remote location where someone has conveniently stacked large quantities of wicker baskets and fruit boxes. It’s a scene that starts suddenly, stops even more abruptly and serves absolutely no purpose.

Bruce Li’s main problem is that he is not Bruce Lee. This is scarcely his fault, and Li is by no means bad, as an actor or a fighter. I wonder how he might have done, if not forced into that imitative pigeonhole. See Jackie Chan, who in his early days, flopped in titles like New Fist of Fury, until he was allowed to showcase his comedic action skills – the rest is history. He’s helped by a decent supporting cast here. Mao, ironically, is best known for playing Bruce Lee’s sister in Enter the Dragon, yet had plenty of well-justified success in her own leading roles. Smith, as the poster proclaims, was best-known for Midnight Express, and went on to play Bluto in Robert Altman’s Popeye; he also appeared in Dune and cult slasher, Pieces. There are times here, especially when wearing dark glasses, that he looks like an irate version of Zach Galifianakis.

All sarcasm aside, this crosses off many of the boxes you’d want, and certainly, far more than expected. Admittedly, my approval may be related to having wretchedly low expectations after Punch. [Your opinion of Plan 9 From Outer Space, would likely be kinder if you had just watched Manos, Hands of Fate] But Revenge delivers copious amounts of well-staged action, some interesting plot twists and a brisk pace that has stood the passage of almost 40 years, better than many of its era.