If you didn’t know it, this proves there were mockbusters being made before The Asylum got into the game. This is largely a knock-off of Mandingo, a plantation pot-boiler from the previous year, starring a surprising number of slumming A-listers, including James Mason (who allegedly needed the money for his alimony payments), Susan George and boxing champion Ken Norton, as well as an uncredited appearance by some guy called Sylvester Stallone. Called a “piece of manure” by Roger Ebert, this didn’t stop it from doing significant box-office business. Which, in turn, led to this Italian knock-off, apparently made at the cost of purchasing a vowel. 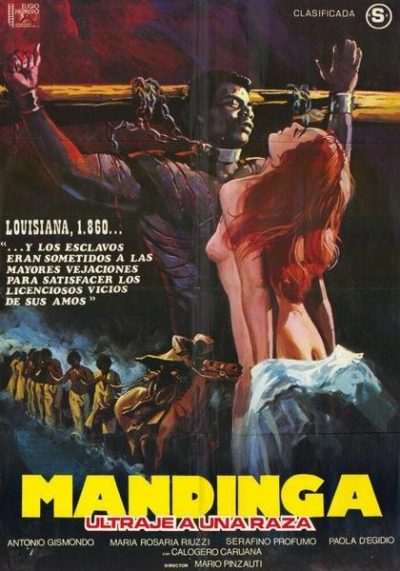 The story is based around the farm of widowed plantation owner Richard Hunter (Profumo), a sadistic bastard in the way you’d probably expect. Rhonda (D’Egido), the cousin of his late wife, comes sleazing her way around, and it turns out she’s even more morally bankrupt than her cousin-in-law, being a gold-digger who aims to get her claws into the Hunter family, one way or another, while also possessing a taste for S&M herself. After throwing herself at the master, and being told he won’t marry her, she sees another opportunity with the return of scion Clarence (Gismondo) from Europe. He instead sets his sights on Mary (Riuzzi), the pure and chaste daughter of the local preacher. But when their first off-spring turns out to be born black… Well, seems like someone has some ‘splaining to do.

I haven’t seen the inspiration, and on the basis of this, won’t exactly be rushing out to find it. This is certainly a lurid spectacle, which undoubtedly qualifies as exploitation – not just blaxploitation either, since no-one here exactly comes out with much credit. Give D’Egido credit though, it’s clear her character is intended to be utterly without scruples. She goes for it in a series of scenes which I’d describe in detail, except I don’t have the necessary industrial-sized container of hand-sanitizer nearby. You just wonder who the audience for this kind of stuff was; I suspect the makers were unconcerned by that, figuring they’d just ride the coat-tails of the bigger production, and throw in inter-racial and/or BDSM scenes about every ten minutes. Hard to say which are duller: those or the poorly-dubbed chunks of exposition.

This seems to be take place over at least a couple of decades, yet no-one – least of all, D’Egido – appears to age significantly over the course of proceedings. Hunter’s mustache gets a bit greyer, and that’s what passes for a “20 years later” caption. If you’re not paying attention, and god knows, I certainly wasn’t, you could easily miss this rather important plot point. Italy also fails miserably as a stand-in for Louisiana, the latter not exactly being noted for its palm-trees.  But I guess you must appreciate, albeit slightly, a film where a character says, straight-faced, “Rhonda, you have to help me.” That this is an entertainment high-spot of the feature tells you all you need to know.