This middle of the road grade doesn’t mean this is a middle of the road film. I’m just not sure whether it’s good or bad. It’s certainly challenging – yet sometimes not in a successful way. Parts are great, but almost as soon as I decided to like the movie, something happened to take me out of it. Certainly, it opens with a bang, depicting the brutal home invasion and hellacious murder of the two elderly occupants, by throat-slice and hammer. [This sets the tone for further, gloriious giallo inspired killings to come] The perpetrator is a masked man, apparently accompanied through the bloody carnage by a little girl, who writes a cryptic message, “My trial is complete,” in victim’s blood on the bathroom wall.  So: what the hell? 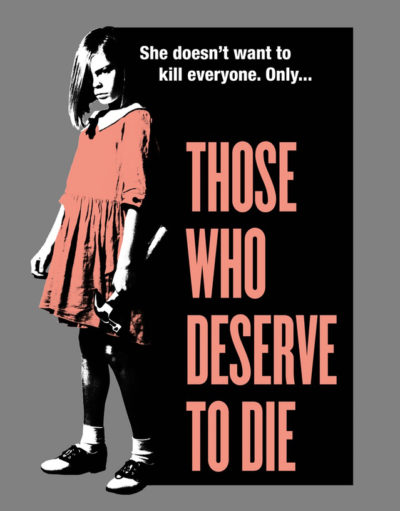 He is Maxim Lynn (Bingenheimer), an ex-soldier who has now returned to the town where he grew up. His entire family were wiped out when he was a child, at the behest of corrupt judge Justice Merrill (Lowry), after his mother interfered with a construction project. Max escaped only by dint of being away at military boarding school at the time, and thus oblivious. But he subsequently pieced together the pieces of what had happened, and is now back, incognito, to wreak revenge on all those responsible. The little girl, Berenice (Lewis), is not real – while it’s never clear, perhaps a vision of a dead sister? – who acts as his ‘murder muse’. To reach Carlisle, he begins a relationship with her estranged daughter, Margaret (Frawley). Yet it’s a risky move, for Max’s mission requires all his humanity to be set aside – something his growing feelings for Margaret make impossible.

It was entirely by coincidence we watched this the same night as The Guest. For both films are about soldiers who return from their tour of duty deeply scarred, and subsequently present a threat to those around them, cloaked under initial normality. Clearly, the two movies are radically different in tone and intent; Guest is certainly more entertaining, yet Die probably has more to say, even if its messages may not be entirely clear. It’s always going to be a difficult job, trying to make the audience empathize with a mass murderer, and you can debate whether the punishment here is appropriate to the crime. The lack of any action by the authorities is problematic; even Judge Carlisle seems almost blasé about the savage deaths of her co-conspirators.

However, the relationship between Max and Margaret is probably the weakest element. It never becoming convincing, and the step from Max seeing her to get close to his target, to being prepared to die for her, is too hurried. I think I have to blame Frawley’s performance. as Bingenheimer seems perfectly fine in his other scenes. Lewis is also impressive, if perhaps too eloquent – though as a fiction of Max’s psychoses, she can be whatever she wants – and Lowry finally gets to let rip at the end, in fine style. Overall, if it’s the kind of film perhaps impossible to like, you will remember it – albeit more for style than substance.