Martial-arts teacher and ex-soldier French (Adkins) runs a school on the edge of bankruptcy. To make ends meet, he takes on a shady bit of employment, collecting money for the equally shady Tommy (Kulich). The rookie is paired with one of Tommy’s more experienced collectors, Sue (Mandylor), to learn the ropes. Which, by and large, consist of French handing out kickings of arse. Credentials successfully established, they are tasked with tracking down a young man on whom Tommy’s pal, the highly unpleasant Barbosa (Todd) wants to take vengeance. But the more they pursue their intended target, the more dubious the whole mission appears to become, and the more reluctant our heroes become to complete it. 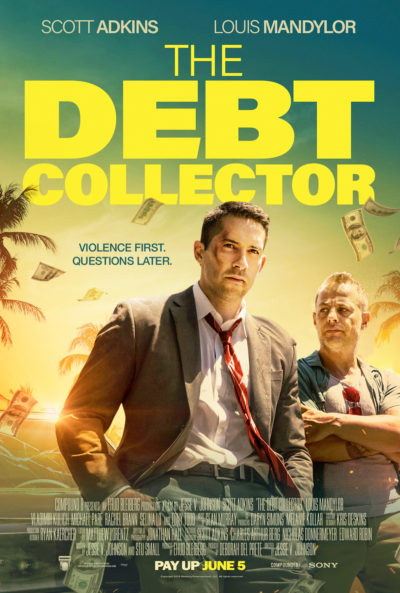 What makes this really work, is the great chemistry between Adkins and Mandylor. It’s classic “mismatched partners”, with French the wide-eyed novice, and Sue the grizzled, usually hungover, veteran. Mandylor, sporting a startlingly good Noo Yawk accent for an Aussie, comes over as a cross between George C. Scott and Rodney Dangerfield. Adkins, meanwhile, does most of the fighting, yet also brings a healthy dose of sarcasm, befitting a Brit. Initially, it seems like a light-hearted romp, mixing crunchy violence with glib one-liners. Yet as the film progresses, it takes on a darker tone, because French is increasingly faced with the need to check his moral scruples when he clocks in. We discover why Sue drinks so much, for example, and this plays into their decision which drives the final act, as they find a mutual line they won’t cross.

There’s one scene which particularly stands out in this regard. It’s the two men, sitting in Sue’s beloved classic car (a 1971 Cadillac Coupe de Ville, should you care about such things – the makers clearly do). They just talk, and Johnson respects the moment, simply and effectively, by pointing the camera at them in an extended shot, and letting the actors get on with the acting. This is the kind of restraint rarely seen in an action movie, least of all for a dialogue driven scene such as this. Very much a case of “come for that crunchy violence, stay for the emotional intensity.”

The story-line could have used a bit of the same willingness to break with tradition. French doesn’t need to be both a former soldier and own a martial arts school: pick one. The latter, in particular, seems to exist purely to wedge in a Michael Paré cameo. On the other hand, I’m not certain what all the black-and-white footage of cattle in a slaughterhouse was about. I’m sure it was meant to imply something Deep and Significant, and every time this showed up, we were waiting for some kind of explanation – or, at least, relevance. Never happened. Still, it’s further evidence that Johnson wants to put in the effort, and create something that’s not your stock action B-movie. While not entirely successful, most of the punches land effectively enough to leave a decent impression.