This is one of those films it’s best not knowing too much about. I can talk about the first half fairly easily, but in the middle, it takes a sudden left turn. Not coincidentally, this is when Lance Reddick shows up. You may or may not know the name, but he plays the concierge at The Continental hotel in the John Wick franchise. He was also Broyles in Fringe, so in TC Towers, his appearance basically means shit is going to go down. This film does nothing to disprove that theory, for it becomes a very different and wild ride on his arrival. Perhaps a bit too wild at the end – unless American high schools are even more radically different from their British equivalents than I thought. But it’s still a lot of fun. 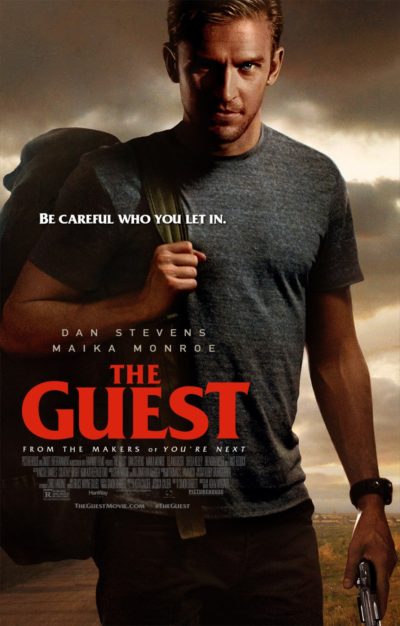 David (Stevens) shows up on the doorstep of the Peterson family, claiming to be a recently discharged platoon mate of their soldier son, who was recently killed in action. His bona fides seem legit, and he gradually charms his way into each of the Petersons’ hearts. For example, he becomes a hero to teenage son Luke (Meyer), by dealing with the bullies who make his life hell. Daughter Anna is initially quite smitten too, but a series of suspicious deaths caused her to question David’s identity. She calls his former base to check he is who he claims. This inquiry alerts Reddick’s character who… And that’s about all I can say. Sorry.

From the audience point of view, it’s clear out of the gate that something is up, and indeed, it doesn’t feel long before David’s true self is exposed. It’s still fun to yell at the family as they naively welcome the cuckoo into their nest. I also can only admire a soundtrack which includes Front 242, The Sisters of Mercy and Hocico. Though I am not entirely convinced college age kids at a New Mexico house party these days, would genuinely be listening to the likes of a D.A.F. song, recorded well before they were born. [Even if the film does take place around Halloween, when everyone’s inner Goth comes out] My other issue is the finale, which takes place in a “haunted house” attraction set up at Luke’s school for their fall dance. This amazingly elaborate creation seems far too extravagant and expensive for a three-hour disco, to the point it became a serious distraction.

These are, obviously, minor gripes and otherwise, it’s a slick, entertaining piece. Stevens is highly charismatic, and you can see how he could ooze his way into anyone’s confidence. That’s crucial to the film’s success, and even as he becomes considerably less sympathetic (to put it mildly!), he’s still hard to dislike. It’s surprisingly funny, too. Well, not funny haha, though actually I did laugh out loud more than you’d expect at deadpan humour, stemming from the characters and their reactions; for instance, Luke’s blithe acceptance of David’s murderous ways. It makes for a great deal of fun, and delivers all the blood and bullet-ridden nonsense you could want.