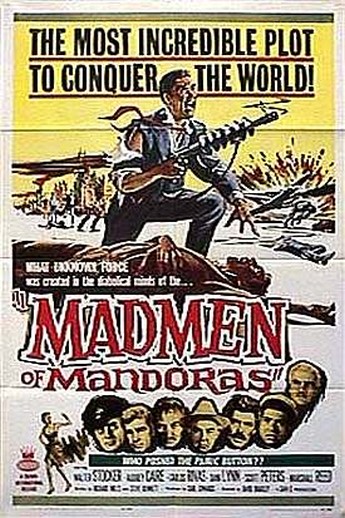 Technically different films, but I’m putting these two together, since they are effectively the same movie. In the 70’s, when Crown started releasing their library to TV, Madmen wasn’t long enough. So they edited it, added a significant slab of new footage at the opening, plus a car-crash borrowed from Thunder Road (which takes place at night, while the chase preceding it is in broad daylight), and also gave it a far more marketable title. Hey, presto, now the story can be sold. Both centre on Phil Day (Stocker), the son in law of Professor Coleman, who has the sole effective antidote to G Gas, a nerve agent, where a single cylinder could wipe out an entire city. He is kidnapped and taken to the Central American state of Mandoras – it turns out that Hitler didn’t die in Berlin in 1945, but escaped [well, some of him did], and is now plotting a true final solution, involving the simultaneous release of G Gas all around the world…just as soon as he gets the antidote out of the Professor. Can Phil, his wife, and the Prof’s other daughter, who is treating the whole thing as a groovy vacation, with all-expenses paid, rescue the scientist and stop the world from being taken over by a fascist head in a pickle jar?

If not quite the worst movie ever made, either incarnation of this certainly qualify as not far short. On balance, Brain is likely worse, given the horrible job done with matching the new footage – compare and contrast Prehistoric Planet – and after 25 minutes, you’ll be looking to gnaw off a limb to escape from agents Vic and Toni. That’s before you even get to the older movie, which is just dumb, incomprehensible in the most part, and with so many ridiculous elements it provokes a kind of bored pity rather than much amusement. That said, the Fuehrer concept at its core is loopily delightful. There’s nothing quite like seeing a severed head yell “Mach schnell! Mach schnell!” from under a glass dome, even if a more appropriate title would be “They Saved Hitler’s Brain, Head, Neck and the Top Bit of His Shoulders.” Also check out the head’s eventual fate, when it’s clear that the reason Hitler lost the war, was because he was made of wax. However, the tedious and poorly-written aspects vastly outweigh the fun to be had here. The original film opens with an elephant being gassed, collapsing to the ground in stock footage. While it’s supposedly to demonstrate the effects of G Gas on animals, it’s also an appropriate summary of the effect the film will have on the audience.