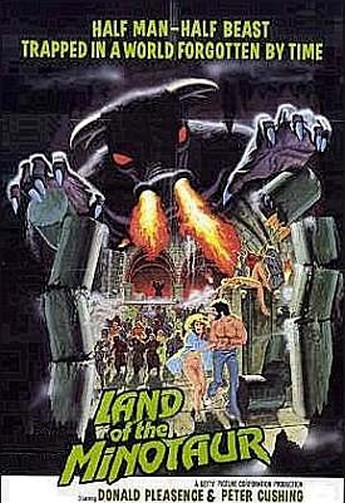 Despite a cast featuring two horror icons, this is a pedestrian and disappointing yarn about a Greek town, almost entirely populated by worshippers of a idol with a the body of a man, and the head of a bull, which shoots fire from its nostrils. [Cool: I want one for the living-room] I’m thinking it’s Moloch. Anyway, this requires regular human sacrifice, and fortunately, there are any number of amateur archaeologists who turn up to dig in the local ruins. The steady stream of disappearances which results eventually irks local priest Father Roche (Pleasence), into calling for back-up, in the form of NY private eye Mile Kaye (Skouras), along with Laurie (Peters – whom I remember fondly as the Australian guest accidentally groped by Basil in Fawlty Towers. Here, she wears platform shoes, hot-pants and other non-archaeology suitable clothes), the girlfriend of one of the missing diggers. She keeps seeing, and being chased by, mysterious hooded figures: Milo is sceptical, but Father Roche has no doubt they are up against the devil himself. After Laurie becomed the latest abductee, the men have to go up against cult leader Baron Corofax (Cushing) and try to rescue the survivors before they become the latest victims to go under the knife.

It’s only when Cushing, and to a lesser extent, Pleasence, appear on-screen, that the movie even stands a chance. The director makes good use of Cushing’s piercing blue eyes, and he lends the film weight and interest which is sadly missing from the rest of it – and that’s the majority of the movie. It’s slow and talky when it needs to be building up the energy and building towards the finale. There’s too much creeping around underground temples, and sitting around at the local inn, and Karagiannis fails miserably to build suspense. The Greek settings are at least somewhat different, I suppose, and of all the people to produce the noodling, primitive electronic soundtrack, would you believe… Brian Eno? Yep: the famous new wave producer for, among others, Talking Heads and Devo. Go figure. Anyway, it certainly needs a better finish, than the one we get here, which takes the concept of deus ex machina – with the emphasis strongly on the deus – and buries it headfirst in the ground. That adds a final full-stop to a movie which could probably best be described as a load of old bull.