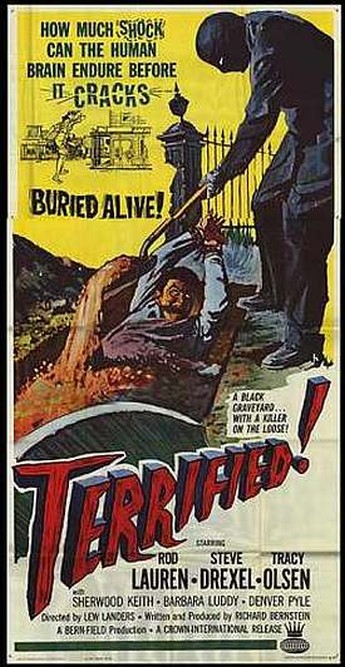 This is one of those times where the title, combined with the film’s quality (or lack thereof), has me keen to write a one-line review and leave it at that. “Terrified? Terrible, more like…” After a somewhat striking pre-credit sequence, in which a man in a black ski-mask is pouring cement into a grave where his victim lies helpless, it’s rapidly downhill from there. Turns out this was Joey, the brother of Marge (Olsen), and is only the latest in a significant line of her relatives to meet an untimely end. The masked psycho also enjoys moonlit drives and scaring other users of the road by driving right at them. Marge’s affections are being fought over by Dave (Drexel) and Ken (Lauren), the latter of whom is writing a college paper on terror. Marge and Dave head out to a local ghost-town to find “Crazy Bill,” the local drunk, and see if he can shed any light on what happened to Joey. They find him alright… They find him dead!!!! [Sorry. Couldn’t resist] Ken shows up, and while M&D go to call the sheriff, starts looking for the killer…

Way too much creeping around a graveyard in this one. Way too much, though it is a remarkably well-illuminated cemetery, given it’s supposedly the middle of the night, and is pitch-black during the road scenes. There are virtually no aspects of this that are well-done: the performances are cardboard, the direction pedestrian, and if you don’t guess who the killer is with your first attempt, you’ll nail it with your second – simply because of the limited pool of candidates, though the characters explicitly pronouncing who he is targetting, and why, early on certainly doesn’t enhance the suspense. About the only aspect that’s remotely praiseworthy is the way the masked killer targets men, which is somewhat ahead of its time. Terrified seems especially poor when you realize Psycho came out three years previously. Now, not every such movie can be a classic, but it also fails miserably when placed beside (while I’ve made this comparison before, it’s worth repearing) the similar kind of things Hammer were making – Paranoiac was released the same year, and Nightmare the next. Even if far from the best things the studio produced, they’re still far better than this tedious and completely uninteresting effort.