Just one review this week, since I’ve spent most of the time going through the extras in the five-disc Blade Runner briefcase, which has to go down as among the most comprehensive DVD boxed-sets ever dedicated to a single movie. I think the line which stuck in my mind was someone saying this was the last great “analog” SF movie. By that, he meant that all the effects were done in camera, rather than as CGI, using motion capture, matte paintings and models. And, even approaching thirty years later, they are impeccable, creating a future that is simultaneously nightmarish and enticing, sinister and alluring. Into this, he drops Deckard (Ford), a world-weary guy, tired of retiring “more human than human” replicants, but forced back onto the job to hunt four skin-jobs, led by Batty (Hauer) who have returned to Earth to seek out their maker, in order to extent their artificially-reduced lifespan. 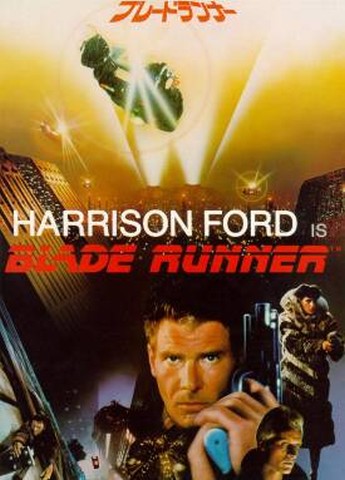 Complicating matters is the presence of Rachael (Young), another replicant, who has been given no awareness of her own condition, and there’s also the question of whether Deckard himself may not be human. After Hampton Fancher and David People had moulded it into their vision of the future, it differed significantly from Philip K Dick’s original: there, the replicants were less than human, having lost all ability to care for anyone, while the movie has them as Übermensch, improvments both physically and mentally. Still, Dick approved, saying: “The two reinforce each other, so that someone who started with the novel would enjoy the movie and someone who started with the movie would enjoy the novel.” As someone who has never read the book, all I can say is that the movie is magnificent. Scott’s attention to detail meshes DF with film noir into one of the most influential movies ever – it’s hard to see how there could have been The Matrix, for example, without Blade Runner.

If there’s a weakness, it’s Rachael. Young’s performance is clunky; she’s never convincing as a human being, and just wanders through her scenes like a robotic china doll. As a result, there’s no justification or explanation for why Deckard falls for her character, and the romantic aspects of the storyline are dead in the water. However, this flaw perhaps only highlights the perfection which is the rest of the movie. Ford and Hauer have never been better, and the final scene, where Batty finally comes to terms with his own mortality, is one of the most beautiful and memorable in all cinema. It’s almost infinitely rewatchable: there is so much depth to the movie, both in the world that’s created and the emotions it generates, that there’s something new to appreciate every time. I’m definitely not expecting it to be another decade before I see it again.