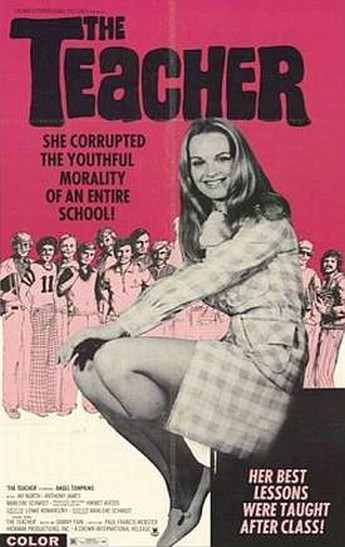 Despite the claims of the poster on the right, Diane (Tompkins) hardly corrupts an entire school. In fact, after the first scene in which she appears, she’s never even at school, since it’s summer vacation. With her husband a shiftless motor-bike drifter who’s never around, she sets her site on eighteen-year old neighbour, Sean (North), who initially resists, but eventually succumbs to the charms of this proto-cougar. However, taking exception to this is Ralph (James), a Vietnam vet obsessed with Diane, who spies on her from near and afar – he pops up in the most ridiculous circumstances, for example donning scuba-gear so he can swim out to her boat and peer through a window at her and Sean. It doesn’t help matters that Sean was involved in an incident that resulted in the death of Ralph’s little brother. [As an aside, I dunno how much teachers got paid in the seventies, but Diane can afford not just a boat, but a sports-car and a house with a pool. Nice to see educators getting the credit they deserve]

This isn’t too bad, with Playboy model Tompkins making a worthy temptress; if anything, she’s almost too nice, popping round to visit Sean’s mom, who is surprisingly cool with the concept of her son getting friendly with someone 50%-plus older. Probably cooler than Sean, who holds onto his virginity much longer than I would have at his age, given the same opportunity. It ends in a brutal confrontation at the same abandoned warehouse, where the film started with Ralph watching Diane sunbathe, and is more downbeat than I expected: there’s a price to be paid for immorality, it would appear. The film could have done with greater emphasis on Ralph, or something – for once the Diane-Sean relationship is established, the story then treats water for too long, though Tompkins is hardly a chore to watch. Oh, and the mother of John Cassavetes turns up as a gossiping old biddy. It’s interesting to contrast the attitude here with that seen in Pickup. If a young girl is seduced by an older man, that’s wrong; but if it’s a young boy, seduced by an older woman… Woo-hoo! That’s a movie. Just a thought.