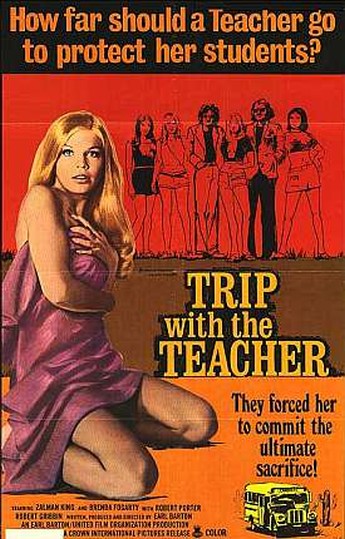 Given the title and the first few minutes, depicting a chaperone (Fogarty) and her four charges on an “educational” trip to the desert, I was expecting a salacious soft-porn romp – perhaps with acid influences. Wrong. It’s more of a nudie-roughie, after the young ladies’ bus breaks down, leaving them at the mercy of a trio of bikers: Jay (Gribbin) is the nice one, Pete is neutral…and then there’s Pete’s brother, Al (King). King – and, yes, it’s the Zalman King who’d become a prolific producer of soft-core porn shows like Red-Shoe Diaries – is clearly fresh of his Psycho 1.0.1 acting class, with guest teacher David Hess. His performance is all staring eyes and wild hair (or is wild eyes and staring hair?), and I’m still undecided whether it’s Oscar-worthy or ludicrously OTT. Either way, he runs over the head of the bus-driver and then decides he needs to dispose of the other witnesses. His brother is somewhat on board, especially when visions of fun with the girls is dangled in front of him, but Jay is resolutely opposed and sides with the women.

While never quite sliding beyond an R-rating, this feels more like a grindhouse flick than a drive-in one: it’s hard to imagine any couples making out during this battle of the sexes, given the harsh treatment on view. It is clearly the product of a different era, with most of the women (up until the final scene) largely passive, waiting for Jay to rescue them. However, it’s rarely dull, except during an opening reel that drags badly, and there is a good motorcycle chase, with the actors apparently doing their own stunts. Given the speeds involved, rough terrain and lack of helmets, there’s a real sense of danger, and the remote locations certainly add to the feeling of the victims being isolated from any outside help. However, this is mostly King’s film, and his twitch-infested performance is the most memorable element this has to offer. Whether that’s a good thing or not, is likely up to the individual viewer – I have to say, I found this rather better than Last House on the Left.