You wait ages for a film about carnivorous locusts, then two show up in a couple of months. Okay, Locusts was made back in 2005, but we didn’t watch it until a couple of months ago. So you’ll understand my surprise when Netflix released this French movie in August, covering what seemed a similar theme. Virginie Hébrard (Brahim) is trying to start a business raising locusts as a source of protein. It’s not going well. The livestock aren’t breeding quickly enough and – inexplicably – nobody is that interested in eating ground-up insects. Then, Virginie knocks herself out in the locust enclosure, and discovers they have a taste for blood. Suddenly  they’re multiplying like crazy and her business is taking off (literally, hohoho). But more insects need more blood, so how is she going to keep up with demand? 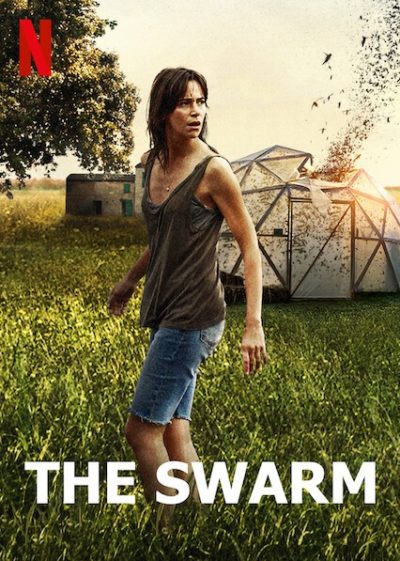 If the film had kept itself to this topic, it would have worked better. But instead, it diverts far too much time and energy into plot threads which are just not interesting. We do not care about Virginie’s husband having hung himself in the barn. We do not care about a fractured relationship with her teenage daughter, Laura (Narbonne). And we certainly do not care about Laura being teased by schoolmates about her mother’s work on Facebook or whatever. We are here for locustmageddon. Despite the occasional grungy moment as various animals and humans stray into the wrong tent, there isn’t enough of this to satisfy our appetite for insect destruction.

Instead, there are all manner of loose ends. At one point, Laura vandalizes one of the enclosures, and a swarm escapes. We leaned forward, expecting them to launch an assault on… oh, a school, a church picnic or something. But they just seem to fly off and the plot forgets all about them. I think there may be some statements being made in the way of social commentary, though it’s hard to be sure quite what. Perhaps something about those who till the soil giving their literal blood for it. Though I’d say, if there’s a lesson to be learned here, a more pertinent one would be about doing your market research before you plough all your family’s assets into a locust farming enterprise.

I think this film may have been a victim of some mismarketing. The synopsis and trailer made it look like a creature feature, but the makers appear almost completely disinterested in this aspect. It’s more of a social drama with dark undertones. If Jean de Florette had involved blood-fed locusts instead of flowers, you might have ended up with something like this. Except that makes it sound considerably more interesting than the pedestrian reality here. All the admittedly creepy close-ups of little locust faces chittering, gnawing and shedding their skins, can’t overcome that. Anyone expecting anything like the 1978 bee movie of the same name is going to be particularly disappointed in this underwhelming effort.