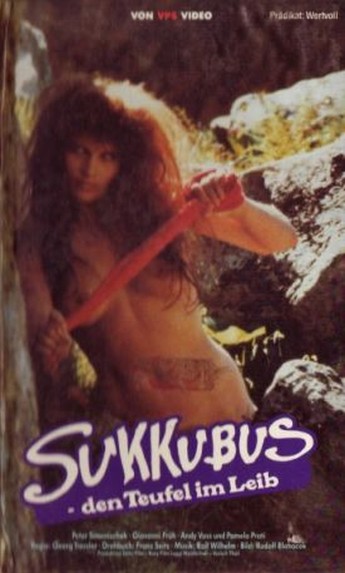 This German obscurity is apparently based on a Swiss legend, where a trio of lonely herdsmen make a woman out of sticks and straw, only for her to come to life and punish them for their sexual lust. Damn. So much for getting a paragraph out of the plot, because that’s pretty much all there is here, in terms of storyline. Tressler seems much more interested in generating atmosphere, both from the characters and the location. The former are a study in contrasts. Simonischek plays the oldest and calmest, though even he has to run off and take a (very!) cold shower in a glacial waterfall when the site of two cattle mating gets him over-excited. Früh is the troublemaker: he is none too fussy, even trying it on with the young apprentice (Voß) before he’s stopped, and it’s also his drunken suggestion that kicks off the fabrication.

Quite why or how their creation suddenly turns into a sultry young thing (Prati, now an Italian TV hostess), albeit with eyes that scream “Stay WELL away!”, is never explained, but needless to say, full advantage is taken by the two older men. A fatal mistake… This would probably have worked better as a 25-minute short film, and certainly drags as a feature, despite Tressler managing to imbue the Alps with an air of brooding menace, undreamed of by Julie Andrews. It’s also impressive how creepy a simple pair of contact lenses can be, as worn by the succubus. However, that’s almost the extent of her menace, and considering what the men try to do to her, I’d like to have seen her be a damn sight more vengeful, instead of a bit of largely off-camera nastiness, and the ending simply feels like everyone involved got bored and drifted off for a Toblerone or something.

On the other hand, I liked the nice sense of timelessness – really, this could be just about any era – and I guess it could be classed as educational, since you learn the best way to start skinning an apparently-real cow. Overall, it’s somewhat interesting, yet I can’t help feeling a lot more could have been done with the source material. Unless you enjoy watching alpine herdsmen getting tipsy on rubbing alcohol (or the era equivalent), this might not leave much of an impression.