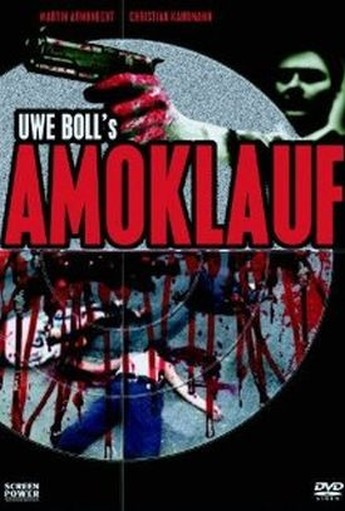 Even the uncut version comes in at a brisk 58 minutes, but it’s probably true to say that it overstays its welcome. For the main thing we learn here, is that the life of a psychopath is apparently not all that different to anyone else, with a lot of sitting around. The central character (Armknecht) in this case appears to particularly fond of the German edition of The Price is Right, so we get way too much footage of him watching that. He also watches hardcore porn, masturbates and kills the neighbour who interrupts him, which seems fair enough, frankly. He spouts cod philosophy about the meaning of life, and then, when it all becomes too much to bear, takes a stroll to a local park and guns down a pack of semi-random people who appear to be on some kind of guided tour in the rain. That’s actually the best section, shot in lengthy slow-motion over a classical soundtrack, to undeniably solid effect.

Up until that point, however, it’s largely amateur-hour stuff, though interesting to note the echoes of subsequent Boll movies in this early effort, dating back almost twenty years now. He has gone on to make several other movies more or less concerned with killing sprees – Heart of America, Rampage and Assault on Wall Street – while Seed also tries to get inside the mind of a serial killer. All those were more successful, admittedly to varying degrees, but mostly because they had enough content to justify their existence. You can see what Boll is trying to do here, contrasting the banalities of everyday life with the twisted mind-set of a psychopath, which allows him to kill, and then go right back to masturbating, while his victim lies, dying, on the floor. However, at this early stage in his career, he’s still nowhere near as deep and meaningful as Boll seems to think he is, and while there are interesting flourishes, what we have here pales beside the likes of Jorg Buttgereit’s Schramm, from the same year.