Before beginning the recent TV series, I figured we should dip into the previous attempt at adapting the Alex Rider books by Anthony Horowitz. This was clearly an attempt to start a franchise. But the world didn’t get the memo, grossing barely half its budget worldwide. That’s a bit of a shame, as the cast here are, as you’ll see from the litany of names to come, almost all instantly recognizable, and mostly good. However, it’s only a bit of a shame. The world doesn’t really need a teen version of James Bond, and the tone here bounces awkwardly around, unable to decide whether it’s serious or a spoof. 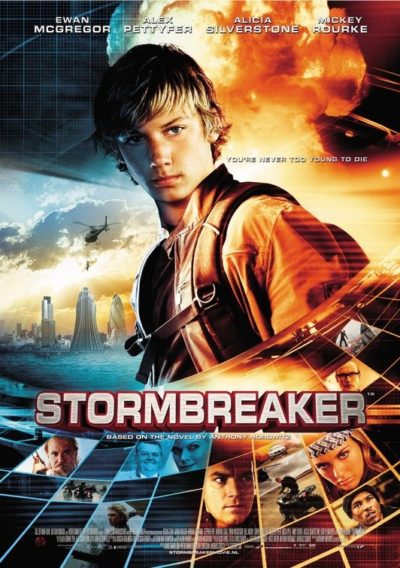 The hero is 14-year-old Alex (Pettyfer), an orphan whose guardian uncle Ian (Ewan McGregor) is killed. Turns out he was a British spy, and had trained his ward in all the skills necessary to follow the family career. Alex is recruited by Ian’s boss (Bill Nighy), because MI-6 are concerned about tech mogul Darrius Sayle (Rourke). He has staged a Wonka-esque competition in which one lucky kid gets to visit Sayle’s facility. Alex is set up as that kid, and discovers a plan to unleash a virus that will kill all the country’s school kids. It’s up to the new recruit to stop both Sayle’s original plan, then also the backup one.

The supporting cast are the main reason to watch this. On Rider’s side, they include Nighy, Stephen Fry, and Jimmy Carr, though I found it hard to take the last-named seriously (expecting his trademark laugh at any second). Meanwhile, under Sayle, we have characters platted by Lewis, Andy Serkis and Missi Pyle. The problems are mostly at the top, with Pettyfer and Rourke. For a hero, the former is not interesting enough to hold the audience’s attention. Meanwhile, Rourke is horribly miscast, about the last person who should be playing a tech mogul. Especially one whose whole motivation is because he was bullied at school. There are so many elements which almost suggest Sayle is a bad parody of a Bond villain, like the tank in which he keeps a giant Portuguese Man O’ War. Except nobody seems to have informed Rourke of the satire.

It was nice to see a finale at St. Mary Axe in the City of London, just around the corner from where I used to work [my Royal Bank of Scotland branch can be seen in the background!] And interest was significantly boosted when I saw Donnie Yen’s name as action director in the opening credits. Sadly, his opportunity to do much was limited. There’s a good fight in a junkyard, a brawl between Pyle and Alicia Silverstone, that’s fun (though it’s clear neither of those actresses are exactly trained martial artists), and that seems about the extent of his involvement. It’s another way in which the film shows an ability to be entertaining only in spurts. Every time it takes two steps forward, this is followed by a large one back towards mediocrity.