Writer-director Ives clearly went into creating this with an agenda: keeping the required resources within what was available to him. It’s a single location, taking place entirely in the vacant warehouse taken over by top-tier hacker Maddie (Marshall), from which to run a bank heist. Her crew – none of whom have ever met her – are primed to go in to the Solid Rock Trust, but of them all, only Rowan (Hearth) is aware that the cash in the bank is not the main target. Yes, just like in Die Hard, the criminals have their eye on a much bigger target: the server in the back which can be used to access and transfer hundreds of millions of dollars in lottery revenue.

Naturally, things do not go as planned – do they ever? Rowan’s key-card doesn’t work. The cops know more about Maddie than she anticipated. And there’s a wild-card on the team, in the shape of the fiery Carmen (Moore) –  or perhaps several, with not everyone necessarily pulling in the same direction. All of this unfolds without us ever glimpsing the location of the robbery, just in phone conversations between Maddie, her team, and others involved, such as the cops outside the bank. Before the very end (when it moves into something close to Reservoir Dogs territory), the only characters seen on screen are Maddie and, briefly, a realtor and his client who come to inspect the property. 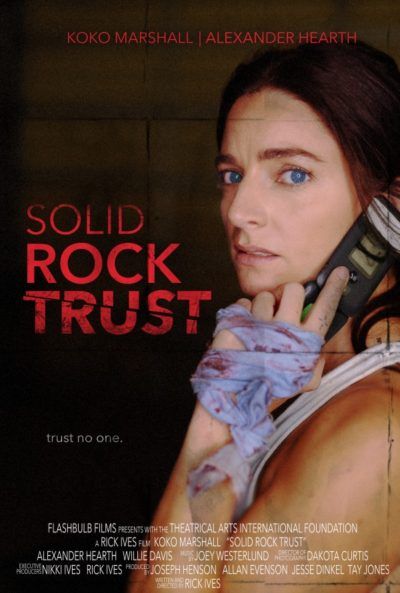 For obvious reasons, this puts an awful lot of weight on the shoulders of both Marshall and the script. Although both certainly put in the effort, I’d say they each come up a little short, and as a result, the film is not quite able to sustain its 97-minute running time. With regard to the latter, there are too many convenient flaws. For instance, it’s hard to credit that a super-organized and efficient player like Maddie would bring on board someone as unpredictable as Carmen, who might as well have “Unreliable hot-head” come up as her caller ID. Indeed, the whole notion of a crew willing to obey, to the letter, the instructions of someone they know only as a voice on the phone, has to be taken on faith.

Marshall is not bad at all, switching between the multiple foreign accents she uses with the team, though this falls apart so early on, you wonder why it was included to begin with. The film does a good job of giving her a back story that’s a bit different: basically, she intends to give away 90% of her ill-gotten gains, not something you typically see in a heist film. However, by the end of the film, the concept has probably outstayed its welcome, after an hour or more of basically Maddie yelling into the void. It’s something even the film may tacitly acknowledge, by abandoning the one-person concept for the finale. If this isn’t quite a success, it’s an interesting near-miss, and I’m curious where Ives goes next.