Watching this was triggered after we started watching the television series, which ran from 1972-83: its final episode remains the highest-rated broadcast in American history, with over 60% of households with TVs tuning in (nothing since then has even reached 50%). It’s odd to go back to the cinematic version, largely with different people playing the characters to whom we’re used, without the annoying laugh track, and with a much darker tone. The last is apparent right from the start, with the famous Suicide is Painless song. The TV show used this only in an instrumental version, choosing to withhold the lyrics: “Suicide is painless, it brings on many changes, and I can take or leave it if I please”

Really, despite being labelled in the IMDb as comedy, I couldn’t tag it as such: it simply is not “funny” to any significant degree. There’s comedy present, but it’s more like the theatre of the absurd. You find yourself shaking your head sadly at the idiocy of the situations, and the actions taken by Hawkeye (Sutherland) and Trapper John (Gould), largely simply trying to stay sane in a world that’s abnormal at best, and crazy at worst. There’s no real plot as such, with little in the way of any escalation, and you can perhaps see why its episodic nature made a translation to a television sit-com appealing. The film is considerably bloodier and, as noted, much more intense. The peak is likely the plot involving camp dentist Painless, who threatens to kill himself (hence the theme song’s title). Nothing a ceremonial fake suicide, resembling the Last Supper for some casual blasphemy, and convincing a married nurse to sleep with him won’t cure. 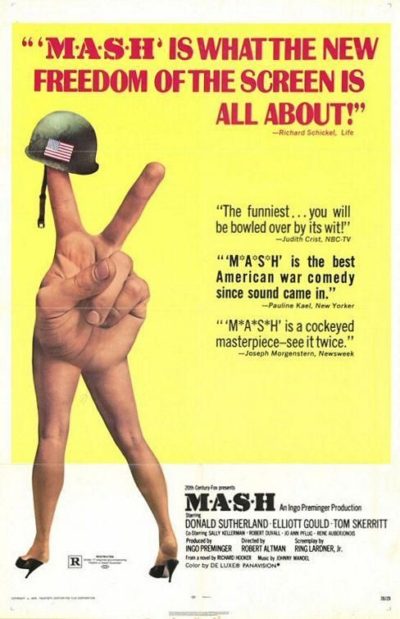 Yeah, even as someone who doesn’t care – it was made in the seventies, about events in the fifties – I must admit the gender stuff here has aged particularly badly. The only significant female role is Major Margaret “Hot Lips” Houlihan (Kellerman), who is routinely humiliated by our heroes, typically in sexually-related ways, and by the end is reduced to a literal cheerleader. But the entire film is more or less a dehumanizing spectacle, of one of the most dehumanizing of our species’s specialties: war. Everything within it is a coping mechanism, be it casual lays or casual callousness, the latter especially targeted against those like Houlihan who seek to maintain a facade of normality through their adherence to regulations. Funny? Yeah, like stepping on a land-mine.

It finishes with – I can’t say “builds to” – a big football game, notable for a couple of things. It’s a very early appearance by Fred Williamson, then known as an NFL player; his acting career went better than the other footballers featured, such as Johnny Unitas. And it was largely filmed by Andy Sidaris, later director of many girls-with-guns films. Though that isn’t such a surprise, when you learn he started is career in sports broadcasting and even won an Emmy for directing ABC’s coverage of the 1968 Olympics. You can see the early version of Altman’s style, which would be refined down the line. Yet this might be a case where the TV version, laugh track and all, could be better than the film which inspired it. It’s certainly less cruel.