I am sorely tempted to write “Croc! of shit” and leave it at that. However, this would be a little unfair. While no great shakes on a number of levels, I was at least adequately entertained. Definitely, you can only respect the makers of this for sheer audacity. They are not only brave enough to drop a giant reptile in the English countryside, where the largest carnivore is the badger. But they do so without any explanation. Experiment gone wrong? Abandoned pet? Zoo escapee? The movie will never tell. The only possible clue is the alternate title, and even there I have absolutely no idea, as to for what (or on who’s behalf) the creature might be seeking revenge.

A spurned lover is one possibility, since the main target of the reptile’s animosity is the wedding party of Lisa (Altman) and Charlie (Nettleton), who are getting hitched at a Tudor manor in the countryside. Adding weight to this theory, Charlie is a bit of a man-whore, banging one of the bridesmaids the night before the event. However, the opening scene shows the predations are not limited to their group, a camping couple also being eaten (reasons we do not camp, #67: crocodile attacks). Somewhat fortunately, Lisa’s father Dylan (Haldor) is a former game ranger. I say “somewhat” since he’s a bit useless. He looks like the makers ordered Jason Momoa on Wish, and is also a man-whore, shagging a (particularly slutty, it must be said) hotel employee within minutes of showing up. 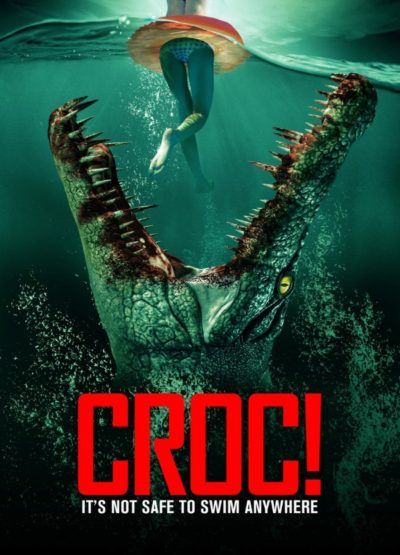 This was a product of Jagged Edge Pictures, which I didn’t know before starting – might not have bothered if I had, having endured their terrible Dinosaur Hotel. They’re also the company behind the upcoming, infamous Winnie the Pooh horror movie (now that character has entered the public domain). This is, at least, generally amusing, albeit at the movie more often than with it. For instance, it seems to be a stealth crocodile, able to sneak up unheard on an entire wedding ceremony. Mind you, the victims seem incapable of taking more than two steps without tripping, including in one case falling into a swimming pool. Spoiler alert: it does not end well for them, although there’s a weird lack of blood in the water.

The effects are fairly basic, with the monster having about three moves, though I was impressed by its apparent ability to open doors. Actually, there’s a case to be made it’s higher up the evolutionary ladder than most of the humans, whose actions are not the smartest e.g. they could simply pile into their cars and drive away. It’s all stupidity necessary to the plot though, so we’ll give it a pass. Have to love the way Lisa remains in her wedding dress, complete with veil, for the entire duration – even when going for a dip to lure the croc at the film’s climax. That’s clearly a woman very committed to her big day.