You don’t typically watch martial arts films for the plot, the performances or the drama. Yet, even by the low standards of the genre, this is a bit rubbish in these areas, and that’s being kind. Especially in the first half, this teeters painfully close to full cringe in its mix of overwrought emotions and absurd jingoism. It is still worth watching though, simply because the action is top-tier. There’s a significant overlap in crew between this and Ong Bak, which made a star out of Tony Jaa. Rittikrai was an action choreographer, and feels like an attempt to one-up that in every department. This means not only the stunts being more wince-inducing; it also means the story being crappier.

Police officer Deaw (Chupong) helps arrest notorious gun-runner, General Yang (Gomarachun), but loses his partner in the process. Angst-ridden, he decides to go with his sister Nui (Ektawatkul), and the rest of her sporty pals, on a charity mission to a remote rural village. Unfortunately, this very village has been chosen by terrorists to hold hostage, in order to obtain the release of Yang. Really: what are the odds? They also have a nuclear missile pointed at Bangkok. Naturally, it’s up to Deaw to rouse the hostages and get them to fight back. This is accomplished by him singing the Thai national anthem and, literally, waving of the flag. It would have saved John McClane so much bother, if he’d known he just needed a couple of stanzas of The Star-Spangled Banner to rout Hans Gruber. 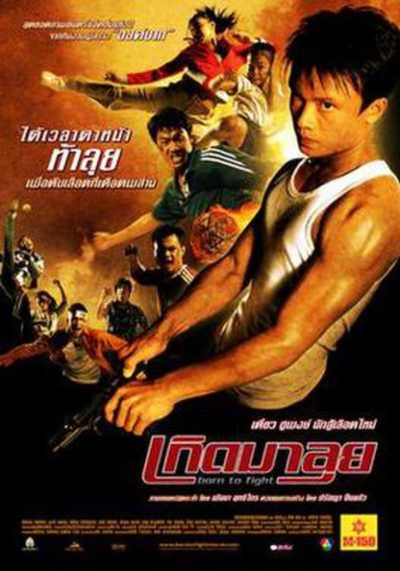 Thankfully, when things kick off, they really kick off. It is highly imaginative – perhaps a little too much so, especially when working the sports into the fights. That Nui knows taekwondo is fine. The gymnastics is okay. The rugby and sepak takraw? No. Though in all cases, even when the concept is shaky, the execution helps rescue it, with stuntwork that ranges from the impressive to the downright suicidal. Things are at their best when sticking to simple hand-to-hand combat. Though “simple” might not be the right word, for Deaw taking on two opponents in a fight, which is basically them whacking each other with burning logs.

The vehicular mayhem is also great, the film book-ended by scenes in which a performer only just avoids getting run over by some heavy machinery. At the end Daew then uses his motorbike as a projectile, which isn’t something you see every day. Not least because it’s on fire when he does so, then flipping over the top of the target like one of those stick figure crash games which used to be popular. I stress: everything here is done in-camera, without CGI or green screen. The only bad news is, that includes the acting. Be aware, Rittikrai made another film of the same name, twenty years previously. For a variety of reasons, it is almost unwatchable, so be sure you get the right version. I didn’t, and it took me 15 minutes of wondering what all the fuss was about before I realized my mistake.