Less than one minute into this, it was already abundantly clear that this was going to suck. The only question remaining to be answered was, whether it would suck in a good or a bad way. Sadly, as the rating above implies, it’s largely the latter. On one level, it’s a spoof of Jaws, relocating it from the coastline of New England to a cornfield in Kentucky. This is clear from the opening, in which a woman abandons her boyfriend to go “skinny dipping” in the cornfield, only to become the shark’s first victim. The characters are also largely named in homages to Spielberg’s movie, e.g. Benchley, Scheider, Gottlieb and Kramer. You get the obvious scenes, where the hero tries to convince the local mayor that the cornfield must be closed for safety, etc. 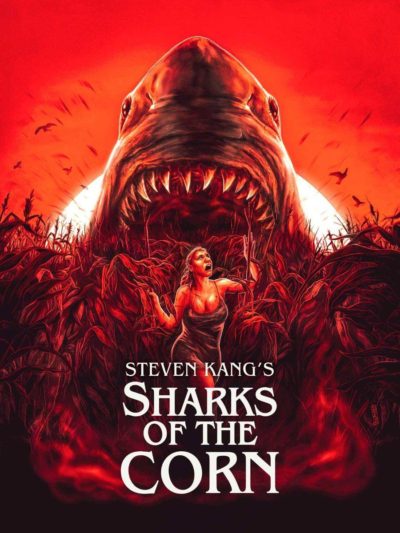 Yet, on top of that, there’s a significant plot about a shark-obsessed serial killer, Teddy Bo Lucas (Guynn), who gets signals from Stonehenge – or, at least, stock footage thereof – and kills as sacrifices to speed up the return of a shark goddess. There’s a whole cult beyond him, much to the concern of police chief Vera Scheider (Stockin). To stop their occult shenanigans, it’s up to her, real estate agent/news reporter Jonathan Gottlieb (Windstar) whose drone saw the sharks, and CIA agent Murray Benchley (Miracle), who was infiltrating the cult. Throw in a stillborn shark pup in a jar, Bigfoot, and gangsters. No wonder it lasts a chunky 107 minutes, which is definitely too long.

The same could be said about She Kills, another slice of microbudget exploito-comedy, which had some of the same people involved. Here, perhaps one-third is at least somewhat amusing and one-third is tolerable: it’s the remainder, falling into neither category, that sinks the movie. It tries to become criticism proof by embracing wholeheartedly its own ineptness.  Yet there is still only so many times you can see a vinyl toy shark being pushed at a victim, while lo-res CGI blood is dumped somewhere near them on the screen. The law of diminishing returns catches up, and it feels like there is simply more invention needed to sustain the lengthy running-time. The moment where the shark jumps up to grab a passing helicopter did provoke a genuine laugh though.

The performances are all over the place, yet the main ones reach the level of acceptable. Guynn is certainly deranged enough, while Windstar has an everyman quality that’s at least somewhat endearing. Stockin is okay, yet is sunk by the feeble attempts at things like a “police station” behind her. When they eventually show up, the shark goddess and her consort (? I’m guessing here – the mythology is never explained) actually look kinda creepy, and you wish there had been more of them. I suspect the film needs to decide whether it’s going to be a Jaws spoof, or go its own way into that neo-Lovecraftian pantheon of cultists and elder gods. Trying to be both things, means it ends up making a not very good job of either.