I guess the creator is to be commended for finding an entirely new subgenre of grindhouse: the rape-revenge comedy. Though I guess, with a name like “Ron Bonk,” nobody is going to take anything you do seriously. It’s the story of Sadie (Russon), whose wedding night is rudely interrupted by a home-invasion (technically, motel-invasion, but let’s not get hung up on details) from the Touchers, a gang of evil reprobates with bad intentions. They rape Sadie, kill and eat(!) her husband… yet something weird is going on, as they all start imitating monkeys. Turns out Sadie’s vagina is possessed by Satan or something, and has a very odd effect on anyone who experiences it. After a failed exorcism, she starts using her Twat of Death to take vengeance on the Touchers. 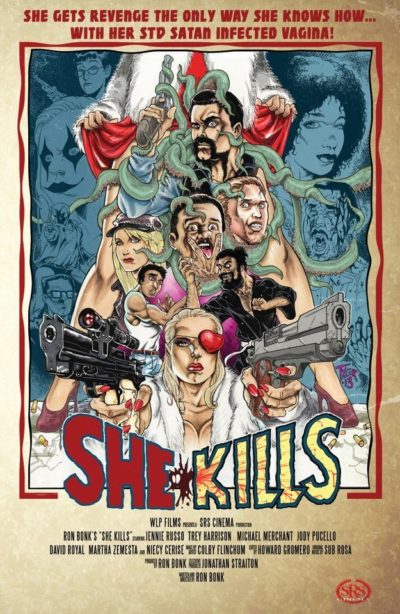 It’s clear that Bonk has a deep, abiding love for grindhouse movies, and if you do too, you’ll spot nods and references to any number of entries. For example, the fetching eye-patch worn by Sadie is obviously a tribute to Christina Lindberg in Thriller: A Cruel Picture [also inspiring Elle Driver’s look in Kill Bill], and there’s plenty more where that came from. Much though I love those movies, the problem is, Bonk possesses all the comic timing of a dead slug. The vast majority of the jokes here get ruined by him running them into the ground, far after any humour in them has ceased. Basically, it’s the philosophy of “If one crotch kick is funny, ten more must be ten times as funny, right?” Even a simple scene like the introduction of the Touchers gets drawn out, well beyond any actual point.

The jokes which work best are those which are not overplayed. An example is the mustache belonging to leader of the Touchers, Dirk (Harrison), an epic entity which appears to be on the verge of achieving sentience and making a bid for freedom. You can catch a glimpse of it top, though it’s only when Dirk takes his top of that its true magnificence can be appreciated. This, or Sadie’s brother speaking in the manner of a badly-dubbed kung-fu hero, actually work. However, safe to say that at 101 minutes, it’s a good twenty minutes too long for the material, which typically isn’t as funny as it thinks. Though I did like the bizarre line in the credits, “Coffin model joke originated by Ron Bonk.” I’ve still no idea what that means, and you don’t see that every day.

Indeed, you will probably see things here which you have not seen in a movie before. Whether you want to see a man killed by explosive diarrhoea… Who am I to judge? The effects are endearingly low-fi, which turns the startling level of gore into a cartoon, without real impact. If it does pick up energy as it goes on, like elsewhere, the post-ending wrap-up gets dragged out beyond what’s worthwhile. Unless the idea of Black Jesus and his large penis hitting on Sadie is your idea of comedy gold. More miss than hit, I’d say.