I usually avoid spoilers in the reviews here. If a film has a significant revelation or twist, it’s likely in the movie’s best interest that viewers don’t know about it in advance. That isn’t quite the case here. The best thing this film has going for it, doesn’t get exposed until about two-thirds of the way into the movie. It’s far too late to salvage things, since your attention will likely have been pronounced dead well before that point. But it’s fun to speculate what might have happened, if the script hadn’t buried the lede and had gone with the twist from the beginning. 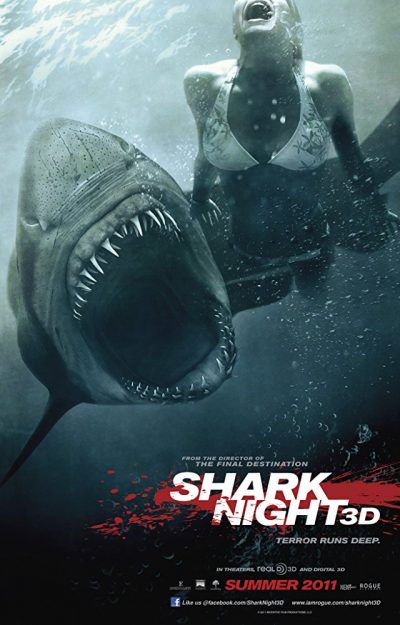 It might not have been quite the banal “teens in peril” flick we get to that point, notable only for its painfully obvious 3D-ness. A group of college stereotypes – the nerd, the jock, etc – go out to a lakeside house, deep in the Louisiana bayou, pausing on the way only to bump into a bunch of locals. It turns out they include an ex-boyfriend of the one responsible for the house, Sara (Paxton), who is well-known around those here parts. But it’s not long before the vacationers find the lake is home to some unexpectedly deadly life, and their efforts to get out only make things worse.

So far, so staggeringly by-the-numbers – and not even enthusiastically, courtesy of its PG-13 rating. This means it leers at the college girls, yet in a strictly bikini-clad way; the gore is similarly “tasteful,” and where’s the fun in that? [Ellis directed a couple of entries in the Final Destination franchise, so knows what an R-rating means] This stage of the scenario has to twist particularly hard to bring the sharks and their dinner together, when in reality, the first sight of triangular fin breaking the surface would guarantee no-one going near any water for the rest of the weekend. And what the hell is the title supposed to mean, anyway? Shark Night? It’s broad daylight, f’heavens sake.

Spoiler alert. The explanation for the name turns out also to be why this salt-water lake is populated with sharks. Remember those locals? Inspired by Shark Week, they decided to bring in their own subjects, and film real attacks for distribution on the Internet to their customers. PPV shark snuff, if you will. Even if not at all plausible, it’s a lovely idea, and if this had been the movie’s focus, could have become a sharp satire of modern media and its endless capacity to pander to the lowest common denominator of audience. Maybe make the rednecks smarter and more savvy than the city kids for good measure?  End spoiler alert.

Instead, it’s little more than a throwaway excuse used to justify a bit of further, limp carnage, and a final chunk where the sharks are suddenly not the biggest threat. It’s likely significant that, when looking for pictures from the movie, only four of the 31 present on the IMDb, actually contained even traces of shark.