This is one of those ideas which will have you slapping your head and wondering why no-one had come up with it before. The high concept is so elegant: Groundhog Day as a slasher movie. Moderately bitchy college student Theresa, a.k.a. “Tree” (Rothe) makes her way through her birthday, only to end up murdered by a killer wearing a baby mask. She then wakes up again, reliving the same day, and no matter what she does, meets violent death at the hands of the baby-faced killer. It may be a different location, or a different method – it always ends the same way. With the help of fellow student Carter Davis (Broussard), she eventually realizes she needs to solve her own murder, to escape the time loop into which she has fallen. 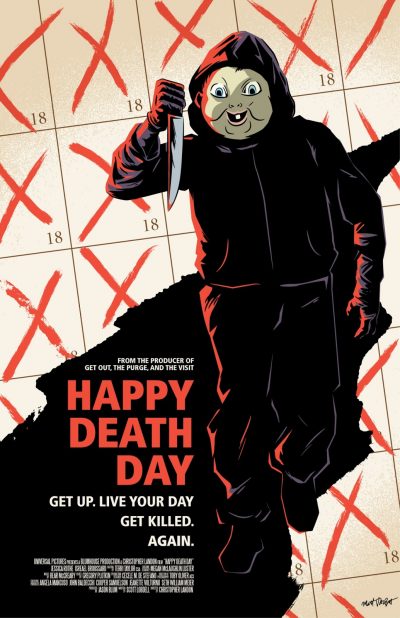 Like Groundhog Day, it’s entirely unconcerned with the “why” of the situation: things are what they are, and the central character just has to deal with them. And like weatherman Phil Connors, Tree has to become a substantially better person before being able to move on, setting aside things like her adulterous affair with a lecturer, disdain for the room-mate (Modine) who has lovingly crafted her a birthday cup-cake, etc. If Rothe is not quite Bill Murray, she’s solid enough, and takes the audience along with Tree on her journey of (internal and external) discovery. After ruling out various classmates, Tree’s suspicion focuses on John Tombs (Mello), a recently arrested serial killer being held in a local hospital, who escapes custody in some earlier iterations. Except, is it moral for her to survive the day if, say, Carter doesn’t?

While I’m not certain the final destination (a phrase I choose, quite deliberately) manages to make logical sense, the very concept here largely allows the film to skate over the thin ice of logic. It’s aided by no small amount of self-awareness, beginning with the Universal logo at the start, looping back on itself a couple of times. Fortunately, it avoids degenerating into Scream-scented smugness, though I do have to deduct points for this being PG-13 rated. Some horror movies do not “need” a more adult rating than that, but the slasher sub-genre is not among them. Skimping on the red stuff is a major party foul, even if the tone here is lighter than most.

It’s a shame the script didn’t make more of the main additional element – that the damage Tree takes from her death carries forward, albeit in healed form, to the following cycle. As is, you need to be tolerant of the shamelessly derivative nature here, although to its credit, this doesn’t make any attempt to hide it, even explicitly referencing Groundhog Day at the end. This inevitably caps out its potential quality, because any copy from a classic is always going to be inferior, almost by definition. Yet the execution of this Xerox, is approaching as good as you could expect, given that limitation.